How accurate is a GPS watch?

GPS watches measure your speed and distance, providing detailed stats about a given workout, whether running, walking, biking, or any other motion-based activity. But how accurate are they? 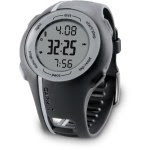 Not very, according to a recent New York Times article. The piece cites several personal tests by the author, as well as some good interviews with race organizers who deal with legions of GPS-armed runners. The upshot? GPS watches seem to have a margin of error on distance in the two to five percent range (eg. reading 12.8 miles on a 13.1-mile half marathon course), and potentially much larger errors in speed, especially pace.

This is not too surprising. Inexpensive commercial GPS units are accurate to within 10 feet, and accuracy varies with atmospheric conditions. Over the course of a long workout, those small discrepancies add up to produce a small, but statistically significant, variation.

It’s also interesting to note that all brands and models apparently suffer from the same issue. So it’s not the just your GPS watch that’s not quite perfect—it’s every GPS watch out there.

GPS watches range in price from roughly $150 to $400-plus; more expensive models usually feature heart rate monitors as well. They tend to be bulky—largely due to the significant battery power that GPS receivers require—but are steadily slimming down. GPS units are notorious power hogs; wristtop units generally last only six to eight hours per charge.