What Is Down Fill Power?

Fill power indicates the volume of a given amount of down. Specifically, it measures how many cubic inches an ounce of down occupies under standard laboratory conditions.

I often describe the world of outdoor company hype and catalog spin as 90 percent marketing and 10 percent science. When it comes to measuring and certifying the fill power of down, however, we’re talking some serious science. 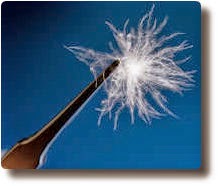 Most major outdoor gear manufacturers use goose down that has been evaluated by the International Down and Feather Testing Laboratory (IDFL), the nation’s leading test facility for down quality control.

Before IDFL tests down for fill power, it must first prepare, or “condition,” the down to ensure that samples are all treated equally prior to testing. The conditioning process is also designed to simulate the interaction between a person and the down product—body motion, perspiration, air circulation, and warmth—to provide an accurate assessment of the fill power actually experienced in the field.

While a variety of conditioning techniques are possible, the U.S. standard utilizes the fill power system of the International Down and Feather Bureau (IDFB) which uses “steam conditioning” as its official method. Here’s the nitty-gritty (warm and puffy?) on how it works, taken from an IDFL conditioning methods evaluation:

“A down specimen of approximately 50g [is placed] into boxes made of electrostatically neutral material (preferably wood). It’s four sides are cut out and screened. In these boxes the material is then stored for 72 hours at 20 degrees C and 65% relative humidity (standard climate). Under these conditions down and feathers will pick-up an equilibrium moisture content of about 13%. For the tests in the USA cylinder the down is agitated at least once daily by means of an air stream from a hair dryer.

“During 2003 Japan’s down association made a study where the down in the conditioning box was agitated not only by air but in addition by steam from a steam jet cleaner. Fill power is measured after cooling and adaptation to standard climate condition. The Japanese data showed that steam conditioning gave the most consistent fill power after the shortest conditioning period.”

Per IDFB protocol, precisely one ounce (28.4 grams) of conditioned down is placed in a cylinder 290 mm in diameter and 500 mm in height. The down is then compressed from above with a flat object, or plate mass, weighing 94.25 grams. The down volume is then measured and assigned a corresponding fill power.

For more on down testing, check out the extensive collection of IDFL technical articles, which feature more fill power science than you can shake a goose at.

For more (less technical) info on down and cutting-edge down products, check out the following articles: