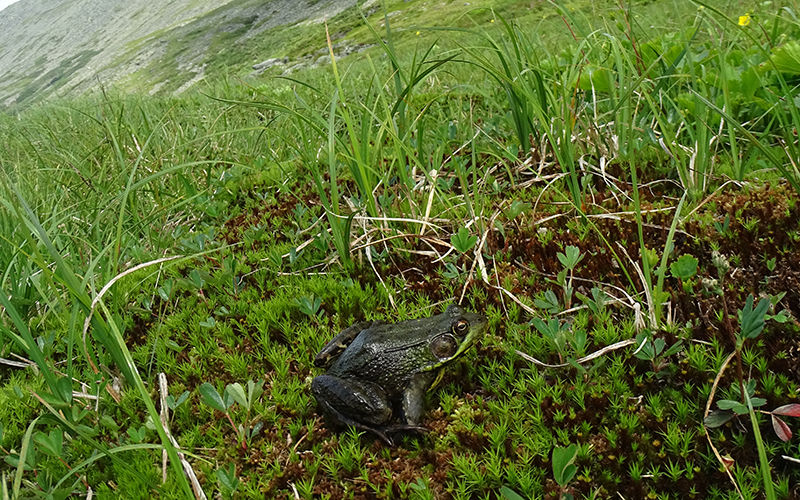 Permanent ponds are scattered across the highest elevation ridges and ravines in New Hampshire’s White Mountains. All of these ponds are accessible by hiking trails, and many feature AMC overnight facilities nearby. The best known of these high-mountain ponds are Lakes of the Clouds and Hermit Lake on Mount Washington, Star Lake on the northern end of the Presidential Range between Mounts Madison and Adams, and Eagle Lake near the summit of Mount Lafayette.

Technically speaking, these are not lakes. Maybe they were named lakes because they are permanent water bodies and so scarce in the mountain landscape. I expect that if they were not high in the mountains, most people would refer to them as ponds. To the hiker, these ponds are photogenic destinations, maybe even a place to cool off or soak their weary feet. But whatever we call them, to some amphibians, these ponds, and their associated habitat, serve a much more urgent purpose: they are an aquatic environment for breeding, egg laying, and embryonic and larval development. 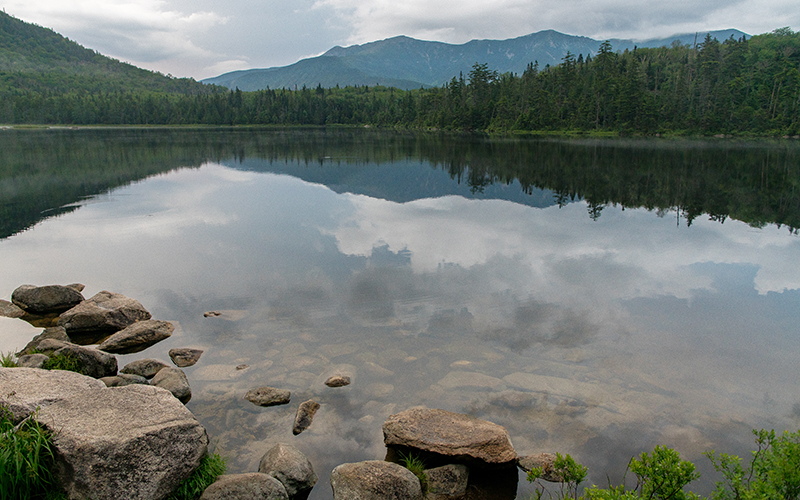 Beginning in May or June each year, wood frogs, spring peepers, spotted salamanders, and American toads migrate to the ponds and the frogs begin calling. Each species has a distinct call, and it takes very little effort to learn all five species you may encounter on your hikes. The start date can vary by several weeks and the beginning of frog calling is often missed by even the most avid hikers because it coincides with the mud season and what I call black fly maximus. I have spoken to many hiking enthusiasts who claim to hike all year long—but avoid the White Mountains during black fly season. Black flies can be brutal, especially on calm, warm days. But these conditions are the perfect time to observe and hear frogs at these mountain ponds. Not because amphibians are consuming flies, but because the snow is mostly gone, the water is warming up, rain is frequent, and adult amphibians are motivated by a pulse of hormones driving them to find mates. The amphibian party in the pond comes equipped with a customized soundscape of calling frogs. Starting with wood frogs, then peepers and American toads. A few weeks later, at Lonesome Lake, Garfield Pond, or Hermit Lake, a lucky listener may hear the plucking call of some green frogs.

I have been fortunate to study the amphibians that inhabit these ponds since 2007. Over the years, I’ve had the pleasure of working with some great research partners and many volunteers on basic surveys and more detailed research focusing on amphibians and aquatic invertebrates in these environments. Our team consists of expert biologists affiliated with Oxbow Associates, Inc., and Beyond Ktaadn as well as seasonal assistants often with no background in field biology, but their qualifications are based on experience on long hikes in the White Mountains and a willingness to make a mountain pond and collecting data their destination rather than a summit. Everyone is a volunteer, most holding day jobs or in school, and all of us work under the conditions of permits from the state of New Hampshire and United States Department of Agriculture (USDA). We regularly update AMC scientists on our findings and have collaborated on data collection when their research projects overlap with our own research priorities. Whenever we’re conducting field work, we are sure to invite caretakers and hut naturalists to join in with us during field work so they can incorporate amphibians into their public programs. 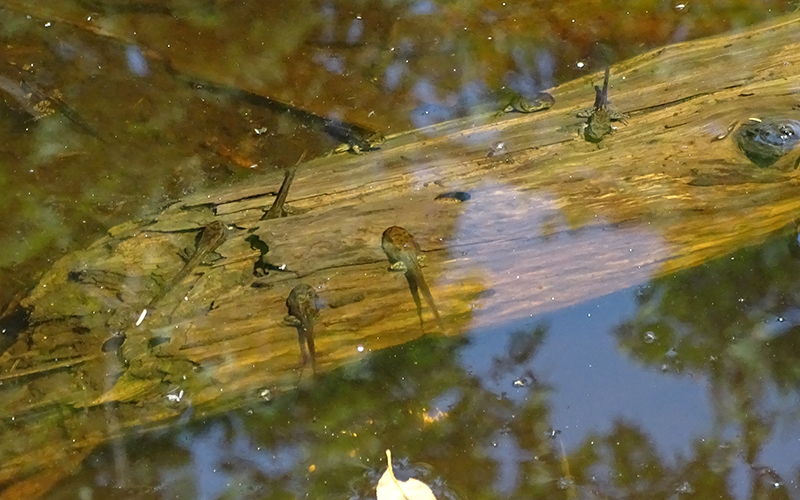 The real backbone of our research has been studying the breeding season—its beginning, peak, and duration—of each species of frog at a subset of the ponds. We use digital recorders that record for a few minutes several times over a 24-hour period to document the species and call intensity. This has provided us with valuable information related to the diversity of species at each location and shown, over a relatively short time (10 years), population declines, rebounds, and new records of species previously not observed in the high ponds. Considering the number of hikers that have passed by these ponds for more than a century, it is surprising how little information has been gathered on amphibians in the alpine or subalpine zones. Historically, most hikers don’t think to take photos and report amphibian observations to someone who has access to state or regional records. Thankfully, several naturalists over the years did note and report their observations of amphibians. Henry David Thoreau noted a bullfrog calling in Hermit Lake in 1858 and “pollywogs” in Eagle Lake that same summer. In the 1930s, “toads” were seen at the summit of Mount Washington eating insects attracted to lights at the observatory. We have seen plenty of wood frog tadpoles at Eagle Lake and presume that is the same species Thoreau observed, but our study has recorded only one bullfrog call at Hermit Lake. American toads are present at both Hermit Lake and Lakes of the Clouds, so it makes sense that they would traverse the summit on occasion.

Now, we have iNaturalist which provides a very useful tool in studying species in remote locations because it provides location data associated with each photograph, captured and uploaded easily using a smart phone. This is finally the community science application field biologists have awaited, as it holds the potential to make a great impact on our understanding of the range and biodiversity of amphibians in remote areas like the White Mountains. The iNaturalist app is easy to use and very helpful to researchers who can use hiker-submitted observations for their research focusing on one species or a group of species. AMC has been promoting iNaturalist projects focusing on plants since 2004, and amphibians are becoming more and more common to see reported in the White Mountains. Please keep logging your observation of amphibians on your hikes.

If you are interested in contributing, you can upload your observations to iNaturalist (amphibians, reptiles, and insects would all be valuable), or if you are even more interested, please contact me directly. Not all observations have to be associated with a formal study, and I encourage people to explore some of these areas on their own to see what they can find. To be sure you are capturing and logging observations in a respectful way, follow Leave No Trace principles and, more specifically, these four important guidelines: 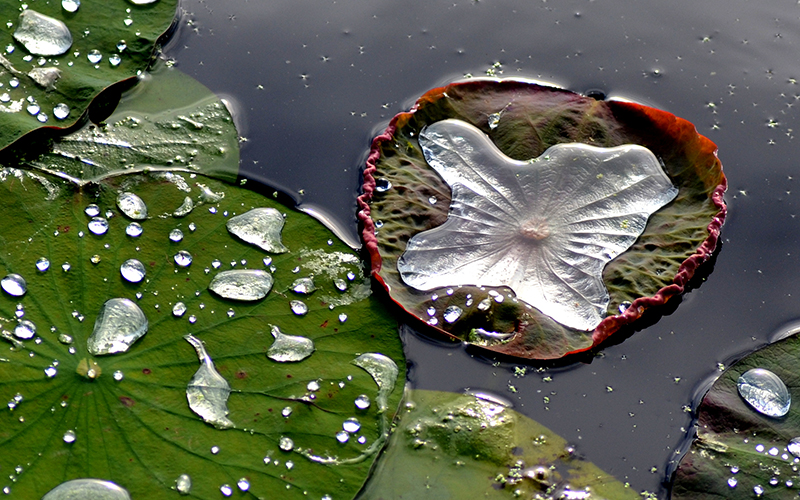 After 10 years of studying frog calls and taking several trips per year to count eggs and measure tadpoles and metamorphs at a subsample of the ponds, we are just now beginning to understand the natural fluctuations of these common species in a regionally rare landscape. The breeding periods are obviously shifted later in the season compared to lowland populations due to the extended winter in the mountains, but the larval period is not abbreviated. Because our study ponds are permanent, the larvae are not threatened by early drying and wood frogs undergo metamorphosis after 60 to 100 days. We find metamorphs mostly in August or early September. Both the tadpoles and metamorphs are larger than most other populations, likely due to a combination of variables including cooler water, the permanence of ponds, and genetics. Furthermore, when metamorphosis occurs in mid-September, precious little time remains to feed and grow prior to the onset of winter, so a larger size at metamorphosis may be a real advantage to survive the winter.

Pay close attention to the amphibians you encounter in the mountains. Unlike more popular or common wildlife, like birds and mammals, amphibians do not migrate and often return to their native ponds, making them excellent subjects for biological monitoring in the mountains. Thanks to mobile technology, hikers could and should provide major contributions to our understanding of biodiversity and activity periods with relatively little effort.

Scott is Vice President and Senior Scientist at Oxbow Associates, Inc., and conducts independent research on many projects throughout New England.