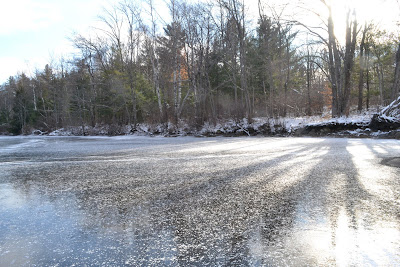 The first really cold night of the winter is forecast for tonight, and as far as we’re concerned, it can’t get here soon enough. Over the past week, calm nights and just-below-freezing temperatures have slowly spread a skim of ice over the pond, which has gradually thickened near shore. Jim, who grew up skating on ponds just like ours, has initiated Ursula and Virgil into the pleasures of smooth ice. We’ve been monitoring the ice like cooks who can’t wait for the pot to boil — except in this case, we want the container, our pond, to freeze.

On one of those monitoring forays last weekend, Virgil ventured out onto the ice in his winter boots. Jim has taught both children to measure its thickness by getting down on their hands and knees and using hairline cracks to see how far below them the ice extends. A few feet from shore, the ice was already more than two inches thick — certainly sturdy enough to hold Virgil, who weighs only 70 pounds. He slid several feet farther before we told him that was far enough.

I understand why he wanted to keep going: The ice Virgil was standing on was hard and clear — “ black ice” so transparent that he could clearly see the rocks and weeds on the bottom beneath his feet, and so smooth it feels frictionless. It’s also a rare treat, formed in just the right combination of cold temperatures and calm, clear air: no wind to ripple the surface, no snow or rain to mix in milky bubbles. For pond-hockey players and pond skaters, black ice is a cause for celebration. But this ice wasn’t quite ready to skate on.

Virgil reluctantly slid back in to shore, and for the next 20 minutes he supplied the rest of us with shards of shelf ice, which we flung, skipping-stone or Frisbee-style, across the surface. Some of the better efforts resulted in impossibly long distances — 150, 200 feet — as if the projectiles actually picked up speed as they spun or slid along the ice. I could see Jim imagining skating along the surface, a hockey stick in his hands, a puck sliding out ahead of him…

Last night was cold again, but not cold enough to add the two or three inches that will make the ice safe for adults and big kids. (Four inches of solid lake ice is generally considered safe for walking and skating.) Tonight should be different. If we step outside, we may be treated to an otherworldly sound: the traveling whooping and booming of ice shifting and cracking as it thickens. With no snow in the forecast until later in the week, we may be lucky enough to skate on black ice at least once this year. 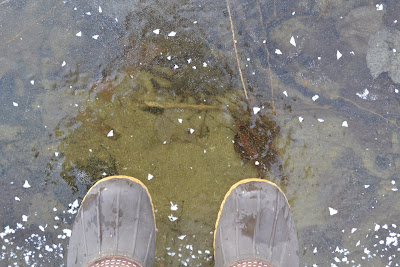