In the Know about New England Snow

Looking for the best online resources for tracking snow conditions throughout New England? Here are the sites I follow to keep abreast of the arriving snow for the winter of 2010-11. 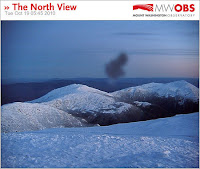 There’s already snow on the ground in the high peaks of New Hampshire and Vermont. Last Friday, a record-setting 18 inches fell on top of 4,343-foot Mount Mansfield, Vermont’s highest peaks. In the Presidentials of New Hampshire, snow coats the ground down to roughly 3,000 feet elevation (the image of the Northern Presidentials is from the Mount Washington Observatory this morning, October 18).

It’s still early in the season, and October snow often melts away before returning to stay in the coming weeks. Here are a few sites I use to track the snowpack as it deepens and spreads south across New England.

Mount Washington Observatory Web Cams
Views both of and from the Presidentials provide an excellent overview of conditions on New England’s highest peaks. The Observatory site also provides current conditions on the summit and excellent discussions about current weather patterns.

Mount Wachusett Web Cams
Multiple web cams from the base of the ski area. If there’s enough snow to play here, there’s usually enough every else in New England.