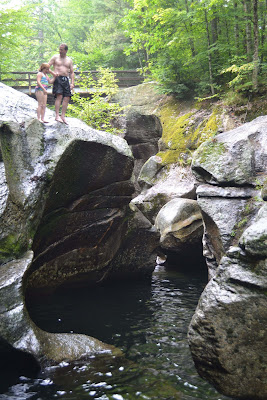 Virgil has made a leap this summer — literally, and, for me, somewhat frighteningly. Just shy of his ninth birthday, he has improved enough as a swimmer that we’ve allowed him to jump by himself into deep water. It’s a moment that comes sooner or later to every parent when, despite your fears and concerns, you let your child get in over his head.

It happened this past weekend, on one day, and at two great swimming holes. On Saturday, after Jim and Virgil dropped off Ursula for her week of hiking and climbing, they headed over to Evans Notch and the deep green water of Emerald Pool. Virgil immediately asked if he could jump off the high ledge. Jim said no, that first he needed to try the lower bench on the opposite side of the pool. Virgil crossed and jumped in from there, to Jim treading water below just in case the ice-cold water or the surprise of the impact made Virgil lose his confidence or his equilibrium. He lost neither, and insisted on the high ledge. Jim let him jump from there, too — again, while he waited below in the pool, just in case. After that, the two of them jumped in together, then Virgil alone, as Jim stood watching from the shore. That was the moment, Jim said. 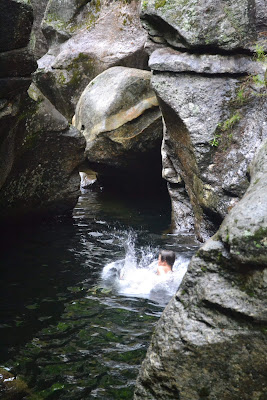 My chance to experience Virgil’s leap came later that afternoon when we met at another of our favorite watery places, Sculptured Rocks in Groton, N.H. I hadn’t seen Virgil’s success at Emerald Pool, so I insisted that Jim wait in the water while Virgil took the 15-foot plunge. Virgil popped back up like a cork. After seeing his ease, and his delight in what he’d done, I plunged down after him. Finally he jumped out from the ledge while both of us watched from the rocks. He’s still not as strong a swimmer as he’ll need to be, but he’s made a rite of passage.

At both swimming holes, Jim and I saw swimmers approach the lips of the high ledges and back away, or close their eyes and collect themselves for long minutes before daring to take the plunge. We asked Virgil later if he was nervous jumping from so high above the water. “No,” he said. “Jumping equals fun. Hesitation equals not jumping. Therefore hesitation equals not fun.”

That joyful lack of fear is a wonderful part of Virgil’s personality, but it’s also made us want to be extra careful with him around water. He has made a leap this summer. When he adds a coefficient of safety to his formula for fun, we’ll know he’s truly ready to jump on his own. 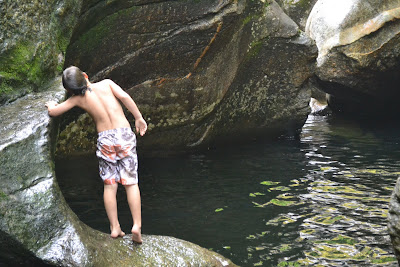