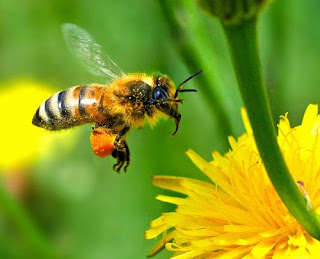 Over spring break, Ursula helped our friends Bruce and Gretchen install beehives in their backyard. Anna, the oldest of their three daughters, started beekeeping last year. We were delighted to receive some of Anna’s homemade honey, and also to learn more about bees.

We hadn’t realized, for example, that the honey we eat is actually “improved” nectar that bees have repeatedly eaten, spit back out, and let dry. (Thankfully, it still tasted just as sweet once we knew that.) Or that honeybees pollinate around one-third of all the fruit eaten around the world.

This year, though, Anna is studying across the country from her family and her beehives. Last year’s bees did not make it through the winter, but everyone in the family wanted to try again. So 12-year-old Sara and dad Bruce agreed to put on bee suits and install this year’s hives. Bruce had already picked up “bee packages” from a local supplier — each “package” about 5,000 bees in a container the size of a large shoe box. The hive’s queen traveled in her own capsule (think of a mesh box for one tube of lipstick) suspended inside the larger container. 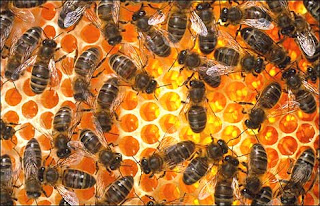 Bruce pried a can of sugar syrup that the bees had been using as a food source out of the container. As bees streamed out of the opening, Sara slid the queen’s compartment from its slot, ran with it straight into the house and into a bathroom, and closed the door. She had the delicate job of removing a cork plug from one end of the capsule and replacing it with a mini-marshmallow — all without letting the buzzing queen escape. (The previous year, Anna hadn’t taken this precaution, and one of the queens had flown her tiny coop; luckily, Anna was able to recapture the runaway queen and put her in her hive.)

While Sara dealt with the queen bee, Bruce poured the rest of the bees into the prepared hive. Ursula was the videographer, though without a bee suit and very aware of all the swarming bees. She caught Sara on camera triumphantly holding the queen bee in her box and explaining that the queen and her workers will together eat through the marshmallow to free her. (The queen will be less likely to desert the hive after that joint effort.)

The two girls edited Ursula’s videotape and put it up on YouTube. (Check out the link below.) If all goes well, we’ll have some more homemade honey before winter.

Other bee facts:
• Honeybees are not native to North America, nor are they the most efficient pollinators. Native bees, such as bumblebees or mason bees, are earlier risers and fly faster from flower to flower.
• Cave drawings tell us that human beings have been eating honey for at least 15,000 years.
• Worker bees — females that are not sexually developed — are the only honeybees that most people ever see. A hive’s few drones, or male bees, don’t work; their only purpose is to mate with the queen.
• A worker bee will usually visit between 50 and 100 flowers on each collecting trip. She’ll return to the hive carrying more than half her weight in pollen and nectar.
• Over the 6 weeks of a worker bee’s life in the summer months, she’ll produce slightly less than one-tenth of a teaspoon of honey.
• To make one pound of honey, worker bees will fly 55,000 miles and tap two million flowers.
• A queen can lay one egg per minute for a total of 1,500 eggs in a single day.
• Honeybees used in commercial pollination, as in the California almond crop, have died in large numbers in recent years. Colony Collapse Disorder is not well understood, but pesticide use appears to play some role in the large-scale die-offs.