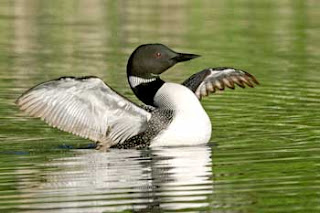 The last member of our resident loon family has been practicing flying for the past several weeks, preparing for its migratory flight to the coast. We’ve watched it churn through the water with its wide webbed feet, its wings flapping noisily, working hard to get airborne. Lately, the big bird has started taking aerial laps around the pond. It’s only a matter of time before it clears the trees along the shoreline, turns east, and follows some inner signal to a spot on the ocean along the New England coastline.

This loon’s parents left a month ago. We’d watched them build their nest, feed the chick when it resembled a fluffy black ping-pong ball, and hover protectively over their growing offspring for more than three months. Then, one morning, they were gone. To us, the young loon seemed to sulk after its parents’ departure. We joked that it might not have realized that loons could fly, since we never saw its parents leave the pond once they’d built their nest.

By this time of year, loons that were born during the summer are called “young of the year.” With luck, this one will safely survive two or three years on the ocean. If it does, it will emerge from its winter molt into full breeding plumage and make another migration, this time inland, looking for a place to raise its own family. And maybe, just maybe, it’ll splash down again on our pond.

Loons are just one of many creatures that migrate each fall in the Northeast. Next: Monarch butterflies.