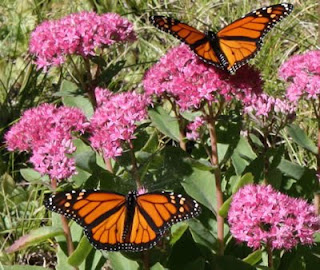 Over the weekend, Ursula and a friend collected seed pods from the milkweed patch in the backyard, talking of sewing the downy white floss into pillows. Last spring and summer, that patch served as a monarch-butterfly nursery. Monarch larvae — that is, caterpillars — are the picky eaters of the insect world, eating only milkweed. Several generations of striped caterpillars grew fat on our milkweed, spun chrysalises, and spread their wings as large orange-and-black butterflies, each generation living about two months.

In September, a final group of caterpillars feasted on the milkweed. This special generation lives much longer than the summer butterflies — up to seven months. They left our yard in September, beginning an extraordinary journey that brings nearly every monarch butterfly east of the Rocky Mountains to a half-dozen mountain tops in central Mexico. Our northern New Hampshire butterflies fly approximately 3,000 miles in two months, or about 50 miles a day, to join as many as 500 million other monarch butterflies for the winter.

The long journey of the monarch butterflies is amazing enough. Almost as extraordinary is that they find their way to an area in Michoacan, Mexico that is one-millionth the size of their summer territories. The butterflies descend on Oyamel fir forests about two miles above sea level. Temperatures in these forests typically remain cool all winter, but don’t dip below freezing. By early November, the migration essentially over, the butterflies cluster on the fir trees, moving little and waiting for spring.

Learn more
– Monarch Watch and Journey South followed the 2010 migration.
– Cape May Bird Observatory tags monarch butterflies on both their southern and northern migrations. Watch a short video.
– Scientists are concerned about declines in the monarch butterfly population east of the Rockies. The butterfly’s winter grounds are threatened by illegal logging, and many parts of its migration path and its breeding grounds in the United States are under severe developmental pressure. A National Geographic video summarizes the issues.