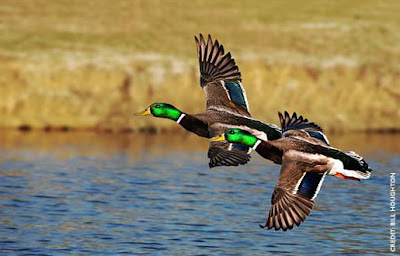 Lately Ursula’s been asking for more Malcolm and Willard stories. Every year since Ursula was in pre-school, and Jim invented two “dumb ducks” to ease the long drive to school, the mallard brothers have squabbled their way through one migration misadventure after another. Telling the stories has become a ritual here, and not just in the fall.

The humor is not exactly sophisticated. How’d they get their names? It’s a simple word problem: (Mal)colm + Wil(lard) = Mallard. Malcolm, the older brother, comes up with one lame-duck idea after another — “Let’s draft behind a jet!” “Let’s sneak in with this flock of geese!” — to ease the pain or boredom of a long migration between our pond in New Hampshire and Orlando, Florida, where Jim decided early on that the two ducks spend their winters. Malcolm is enthusiastic about each new scheme he proposes, but doesn’t think them through very well. Willard, the long-suffering younger brother, tries to argue with his older brother or at least remind him of their previous failures — drafting behind a jet all the way to Wisconsin, for instance, or getting a four-month head start on winter but nearly becoming “roast duck” in the heat of a southern summer. In the end, every time, Willard reluctantly goes along with Malcolm’s scheme.

Inevitably things go awry. Ursula’s favorite part of every story comes at this point, when things have gone about as wrong as they possibly can and Willard finally loses his temper. The ducks will have followed that flock of geese, but will find themselves lost in a Louisiana bayou, with no idea how to get to Florida. “You bird brain!” Willard will yell at his brother. “Oh yeah, Follow the geese, you said. It’ll be easy, you said. Now look where we are, you sack of feathers, you pond scum.”

It helps Jim’s storytelling that dabbling ducks like mallards actually migrate later than most birds, and often fly in mixed groups with other waterfowl. Mallards have been spotted flying at altitudes of 20,000 feet — an elevation at which humans have trouble breathing, let alone propelling themselves. Migrating ducks typically cruise at speeds of 40 to 50 miles per hour and can cover as many as 500 miles a day. And unlike monarch butterflies, there’s no consistent distance that they travel or location they travel to. It gives Jim some wiggle room.

For now, we have noisy groups of buffleheads and mergansers on our pond, and the occasional pair of mallards. No doubt it’s Malcolm and Willard, arguing again about when to leave….