Kids and the outdoors at Tanglewood 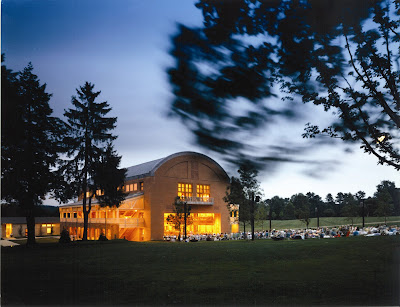 When most people think of Tanglewood, the Berkshire summer home of the Boston Symphony Orchestra, they probably think — as I did before I saw it myself — of classical music inside grand performance halls and elegant concert-goers strolling through formal, manicured grounds. “Kids and the outdoors” never crossed my mind.

And so I got more than one unexpected treat when Jim surprised me with an anniversary trip to Tanglewood to picnic on the lawn and see the Mark Morris Dance Group perform in Seiji Ozawa Hall.

We arrived as the afternoon light was fading across the hills, showed our tickets at the gate, and carried our picnic basket up a gently sloping hill on Tanglewood’s 120-acre grounds. People were already scattered about the expansive lawn on picnic blankets and around folding tables. We walked to a broad west-facing overlook. The Berkshires spread out around us, bathed in pink and soft orange; behind the setting sun, we could pick out the Taconic range, which marked the near border with New York. Jim set out a checkered blanket and pulled out our picnic dinner.

That’s when I noticed the children. I heard their laughter before I saw six or so kids zig-zagging across an open section of lawn in full-out pursuit of fireflies. I could tell that some were probably quite young, maybe three or four years old. Others had the stretched-out, lean look of teenagers or children on the cusp of adolescence. Their delight carried over on the summer breeze, its own joyous music.

As day turned to dusk, another group of children left a big family group near us and ran over to a grove of trees at the top of the slope. Within moments, they’d climbed into the crooks of trees and onto limbs and were calling to each other from their various perches.

Still others somersaulted and tumbled down an open slope by the performance hall. The more I looked about me, even in the fading light, the more children I saw playing on that broad, inviting lawn. In all, before we were called to take our seats inside, Jim and I counted more than 30 children in the kind of free-form outdoor play that we adults sometimes bemoan as lost to the ages.

I’ve since discovered that Tanglewood makes it easy to bring children to many of its outdoor concerts. The Boston Symphony Orchestra offers free lawn tickets to most shows for children and young people up to and including age 17. Parents or legal guardians can claim up to four free children’s tickets per concert at the box office on the day of the concert. (For the Popular Artist concerts, free tickets are available only for children under the age of two.) At noon on Sundays before afternoon concerts and during the open rehearsals on Saturday morning, Tanglewood also offers supervised musical and crafts activities for children and accompanying adults, also free.

The night that Jim and I were there, many in the audience remained outside, viewing the performance through the hall’s open west end from the sloping lawn. I guess that the children who’d been outside earlier either continued playing quietly during the performance or joined their parents in watching. Perhaps to ensure an attentive audience, Tanglewood doesn’t allow children age 5 and under inside the hall during performances.

This summer marks 75 years since the Boston Symphony Orchestra’s first concert in the Berkshires. Jim and I now think of a Tanglewood concert as a great addition to a family weekend in the Berkshires. We’re looking ahead to August 2, to “Tanglewood on Parade” and its fireworks finale, plus a guest astronomer for star-gazing for adults and children and exhibits on the science of music, the sounds of the Sun, and Galileo and his telescope. There’s also the Family Concert on Saturday, August 20, with its $10 tickets for adults and many child-friendly activities.

And all that perfect expanse of grass, inviting us to come out and play.

Learn more
– Tanglewood for Kids
– Look through AMC’s Best Day Hikes in the Berkshires or read these “Great Kids, Great Outdoors” posts for child-friendly hikes near Tanglewood (hikes in Stockbridge and Williamstown).