Kids on the Rocks 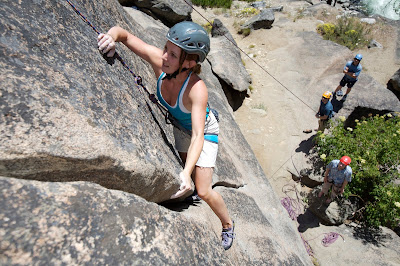 Last year, I promised Ursula that I would teach her how to climb — “real climbing,” she insisted — outdoors, on real rocks, with ropes and harnesses and gear. It’s been a while since I’ve roped up, though. So I was glad to have a chance recently to talk to Brian Crossen, a longtime outdoor educator who teaches the basics of rock climbing through REI’s instructional programs in the Northeast.

Crossen grew up near Bethlehem, Pennsylvania, not far from the Appalachian Trail. Not surprisingly, he spent weekends hiking. He was introduced to climbing when he worked for a YMCA camp that had an extensive ropes course. That experience spurred his interest in climbing and led him to major in outdoor education in college. He’s taught climbing and outdoor skills to hundreds of kids and families over the years.

Even young children can enjoy climbing, he says — no surprise to anyone who’s watched kids clamber up rocks, trees, even cabinets. Crossen says that short classes on climbing walls at outdoor gear stores, fitness centers, camps, and indoor climbing gyms can be a great way to introduce children to climbing. Even if parents don’t want to learn climbing techniques themselves, Crossen has seen the value in having parental support nearby. Parents who learn along with their children are also more likely to understand and help monitor the risks involved with climbing.

Moving instruction outdoors requires young climbers to take more responsibility. A child should be able to tie into a harness using the correct knots and give the right belay commands. “At this stage,” Crossen says, “safety is the most important part.”

When Crossen teaches groups of teenagers, he works hard to create an environment in which the challenges are personal and diverse. “It’s not about getting to the top,” he emphasizes — or about how they look in front of their peers. “The goals I want them to focus on are about building up self-confidence, working with other members of their group to be successful, and supporting each other.”

Young climbers are often hungry for ways to keep climbing, Crossen has noticed. He encourages interested kids to look for youth programs in outdoor organizations and climbing gyms, which can offer excellent support in a controlled environment.

To parents, Crossen urges involvement and an emphasis on safety. “I tell them just because a kid has gone through a four-hour class doesn’t mean he’s ready to go climbing on his own.” Teenagers can sign up for summer adventure programs that include rock-climbing. At a certain point, older teens may be invited to join more experienced climbers. Here, too, though, Crossen urges parents to proceed with caution: “Is my child ready to participate in a mixed-age group?”

Brian Crossen and his wife met on the rocks; their first child is due early next year. Like me, he’s likely to have a kid on the rocks before long.