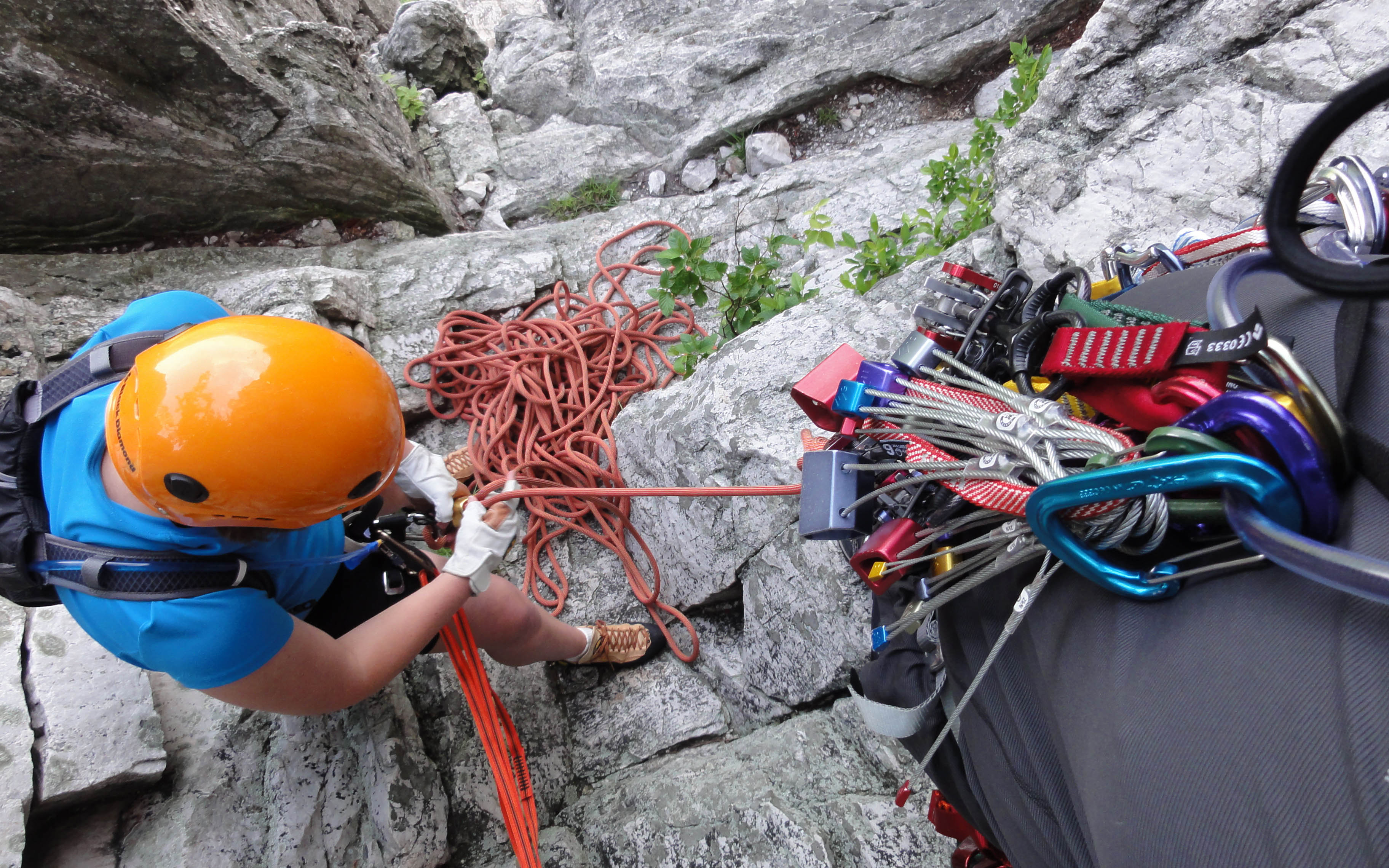 If you’ve mastered the basics of rock climbing and are eager to take your passion outdoors, you might be ready to graduate from indoor walls to real rock faces. First, research what type of climbing you’d like to pursue: traditional, top roping, or bouldering. Then, check with your local AMC chapter or climbing gym to find outdoor classes and trips for beginners near you. These eight destinations come recommended especially for newbies.

Enjoy a variety of shaded and multipitch traditional climbs on Cathedral Ledge, along the White Mountain National Forest’s south-central border. From North Conway, drive 2 miles on River Road (off Route 302) toward the big cliff on the right; Cathedral’s sister cliff, Whitehorse, is on the left. The road at Cathedral’s base winds to the top, where a short hike leads to a rock face known as the Barber Wall. There, a moderate climb called Upper Refuse (5.5) provides a solid warm-up for more advanced routes. Take into account your own skill level and use the Yosemite Decimal System (YDS), which ranks climbs from 5.1 (easy) to 6.0 (can’t be free-climbed).

Test your strength on nearly two dozen bouldering spots on a stretch formed by a long-extinct volcano in southern New Hampshire. Potential climbs include Boulder Natural, a collection of 30 boulders and 150 problems and a warm-up area called the Zoo. A “problem” is a small-scale climb no more than 15 feet high. For some great warm-up options at Round Pond, drive north past the park entrance on Route 156, take a left on Deerfield Road, and a sharp left onto Round Pond Road to find the parking area. Grab your gear and hike down to the pond, where you’ll find climbing areas to the left and right.

Off the MBTA Green Line (D train to Chestnut Hill), Hammond Pond is a convenient option for Bostonians in search of some afternoon bouldering. You’ll find crags between Hammond Pond Parkway and the pond itself, with more located off Beacon Street. An especially popular spot is Alcove Area, where you can warm up on Scrambled (V) before testing your strength at Crispy (V1) and Hammond Eggs (V3). These climbs follow the open-ended V Scale, ranging from VB (beginner) through V16 (hardest). A “+” or “–” means the climb is slightly more or less difficult than other routes in its category. Be sure to bring a bouldering pad (and a friend) to avoid fall-related injuries—a potential hazard on the pebble-filled routes.

Lincoln Woods features many beginner and intermediate bouldering spots linked by picturesque walking and biking paths. Just 10 minutes north of Providence, there’s free and accessible parking near the state park entrance and (in summer only) along Olney Pond Road. Start off with Delight (V0) and Cave Warm-Up (V0). Then, for a challenge, try Mack’s Traverse (V2+). If you prefer cave climbing, head to Pond Cave for moderate routes, such as Lip Service (V2) and the Quiet Buddhist (V3).

These east-facing, pink granitic gneiss ledges on the Appalachian Trail are mainly used for traditional climbing and top rope. (In the latter method, climbers are attached to a rope that passes up to an anchor system at the top and down to a belayer at the bottom). Routes range from easy to hard, with the most beginner-friendly—Try (5.2) and Wilderness Crack (5.3)—on the 20- to 30-foot-high Lower Ledges. From the AT junction at River Road, a 10-minute hike uphill leads to the Upper Ledges, where traditional opportunities abound in the 80-foot-wide Super Slab area.

Known to climbers simply as the Gunks, these unique cliffs are made up of sandstone and quartz-rich conglomerates, or solid rocks with horizontal rather than vertical cracks. Stop by Mohonk Preserve Visitor Center on Route 44/55 to learn more about the historic area and to purchase your pass. To reach any of the more than 300 routes in the Trapps, a 3-mile stretch of traditional climbs within the Shawangunks, walk along the gravel carriage road running beneath the cliffs. Short access trails lead to areas such as Guides’ Wall, a grouping of easy, multipitch routes. Parts of the Shawangunks are closed during nesting season for peregrine falcons, so be sure to call ahead.

Just beyond Washington, D.C., on the Potomac River and accessible via Clara Barton Parkway, you’ll find Carderock. This recreational area within Chesapeake and Ohio Canal National Historical Park includes a mix of top rope, traditional climbs, and bouldering. Introductory options on the 40-foot-high quartz routes include Beginner’s Crack (5.3, traditional and top rope) and Easy Layback (5.4, traditional). Most climbs are within a stone’s throw of mile marker 10 on the park’s clearly marked towpath.

Nestled within Monongahela is Seneca Rocks, a climber’s paradise and a former training ground for soldiers in the 10th Mountain Division. Keep your eyes peeled for the iron pitons they practiced with in the 1940s. You can reach South Peak’s Tuscarora quartzite routes by hiking up Roy Gap Road from Seneca Rocks Discovery Center, where parking is free. Get an early start to avoid lines for traditional climbs on South Peak’s popular western face, such as Old Man’s Route (5.2) and Ecstasy Junior (5.4).

Michaela Johnston is the editorial intern at AMC Outdoors magazine.