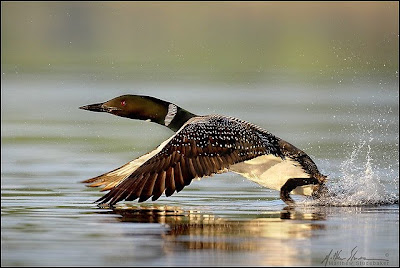 Last summer, for the first time in anyone’s memory, a baby loon was born on the small pond that borders our property. Over the course of the summer, I watched the chick’s parents feed it and protect it, and felt a kinship. I recognized their care and their devotion — even their child-rearing issues. When the chick, at three months already bigger than its mother, continued to prod his parents to feed him, long past the stage when he should have been feeding himself, I laughed at how clearly loutish adolescent behavior crossed the species line. And I appreciated the ferocity of its parents’ commitment to raising their offspring. I saw my own in theirs.

The chick’s parents left the pond in early October for their short migration to the New England coastline. Since then, we’ve been watching and waiting for the juvenile to follow in its parents’ wake. Biologists don’t fully understand how loons, or any migrating birds, know when to leave or where to go. Nor do they know why some struggle with that crucial transition from water to air. It’s certainly hard for loons — heavy, dense-boned diving birds — to get off the water. They typically require a quarter mile of open water as a runway, often waiting for a stiff headwind to assist takeoff. It’s probably extra hard for a big young bird on a small pond ringed by forest.

Still, I’ve been taking quite personally the failure of our young loon to make that transition. As October became November, and as November drew to its holiday close, the juvenile seemed to ignore the signs of impending winter, practicing its flying only in a desultory manner, or so it seemed to me. I responded like a frustrated, worried mother of a teenager. One moment, I’d be calling the juvenile our slacker loon and wondering if its parents had coddled it too much or if they had been in such a hurry to leave that they’d neglected the flying lessons. The next, I’d worry that our pond was too small or its fish population too depleted to nurture this young one.

I kept thinking of the young loon’s parents and all they’d invested in their offspring. Like many a neighbor, teacher, or family friend who sees a teen in trouble, I wanted to help, to step in where parents couldn’t. I started working through scenarios in my mind and talking to Jim about measures we might take to save the loon if it didn’t leave before the ice came in.

The weekend following Thanksgiving, that moment arrived. We returned from a visit to western New York to find the loon paddling around in the only open water left on the pond, an area not much bigger than a child’s wading pool. A phone call to the Loon Preservation Committee informed us that the loon could keep that area open for several days, if the temperatures didn’t fall too far, and if he didn’t tire. Knowing that a warming trend was on the way, we decided to help nature along.

We outfitted our canoe as a makeshift ice-breaker, loading it up with a maul and an 18-pound iron bar to break through the ice, which was already thick enough in some places to hold our weight. We chopped out a channel 70 feet long and a canoe-length wide out nearly to the loon. I herded the ice chunks back toward shore, and Jim, in waders, hauled them out with a sawdust shovel. To keep the channel open, he went out every four hours during the night to break up the skim ice.

Over that day and the next, neighbors stopped by and shook their heads. Let nature take its course, one said. It’s a fool’s errand, said another. “This is crazy,” Jim said. But he kept chopping.

A midweek storm arrived on Wednesday. Its warm winds and heavy rains re-opened the pond. The change in the weather seemed the miraculous reprieve our loon needed.

For four days, we waited for the loon to recover and to, finally, fly away. Mergansers touched down, as did several Canada geese, stopping over on their way to larger water or the Atlantic. But the loon attempted to fly only once a day, never gaining much elevation, always drifting back to the pond. I kept returning to the window and prowling the dock, baffled and anxious, even angry. One afternoon, Ursula caught me yelling to the loon: “Get out of here! Leave! What is wrong with you?” It didn’t help to remind myself that not all young of the year survive, that there’s only so much anyone can do.

On Monday morning, I woke to a grim scene: the loon once again bounded by ice, this time on the far side of the pond, its head barely visible above the thin black lead of water. This time the forecast held out no hope for another thaw. A short time later, I saw the loon a hundred yards from its watery hole, sitting on the ice.

We’d learned in our conversations with the folks at the Loon Preservation Committee that once a loon went onto the ice, it was only a matter of time before it would fall prey to exposure or a fox or bobcat. There was one hope left, and it gave me sudden energy. We launched the ice-breaker again from the shore nearest the loon. Laboriously, we levered and poled and slid across and through the thin ice. As we approached, the loon lay down on the ice and didn’t move. Blowing snow quickly piled up against its back. It offered little resistance when I leaned over from the canoe and netted it.

I walked the loon, in my arms, out of the woods. After driving an hour and a half to the Lakes Region headquarters of the Loon Preservation Committee, I watched as wildlife biologists quickly determined that the young bird was underweight and had possibly lacked the energy reserves to get off the pond during its reprieve. The biologists banded him, put him in a truck, and drove him another several hours to a wildlife rehabilitator in Maine.

We’ve heard since that the loon is recovering from frostbite and eating well. The wildlife rehabilitator plans to release him on the southern Maine coast, perhaps as early as the weekend.

Maybe I cared too much whether this loon survived and made it safely to the ocean. There are names for this kind of over-involvement. But when I think about what drove me to rescue the loon, I think of something Jim said when we were chopping ice. After he’d said, “This is crazy,” he’d added, “But I know this is the same part of you that would do anything to save our children.”

Sometimes that parental instinct drives us to save the life of a child not our own, sometimes even not our own species. Crazy, I know. Like a loon.

Learn more
– about the Loon Preservation Committee.
– about loons from the Journey North migration website.