A Bright Idea for Commuters, the Lumos Bike Helmet Lights Up 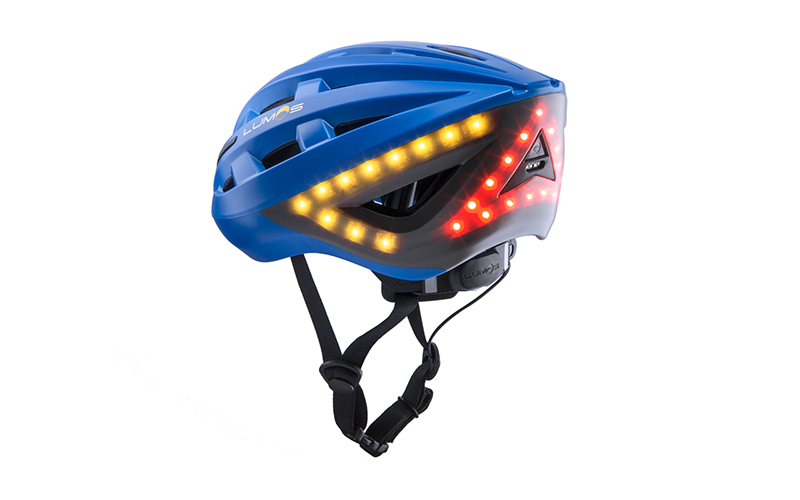 Courtesy of LumosThe Lumos Kickstart helmet lights up to help road bikers stand out to drivers in the dark.

The dark season is upon us when day fades into inky night long before most people leave work, and that means it’s all the more important for bikers to be as visible as possible to passing motorists. I’ve written at length about the various high-visibility items (and colors) that I recommend for cycling—bright is life, after all—but wanted to highlight a relatively new entry into the cycling high-viz market, one that turns your head into a light-up beacon of safety: the Lumos bike helmet.

Lumos released its first helmet in 2015 after a successful Kickstarter funding campaign. Appropriately dubbed the Kickstart ($179), this first light-up offering remains the company’s popular flagship model; I’ve been surprised how often I see them on my Boston-area bike commute.

Core feature: It lights up

The Kickstart helmet’s main selling point is its line of bright, built-in white LEDs across the front and triangular-shaped pattern of red LEDs on the back (there are also two other sets of lights on either side of the rear light-up triangle; see below). Based on my own observations, the helmet definitely increases the visibility of riders who wear it, in part due to its higher, more elevated position compared to the usual bike light locations on handlebars and seat posts, which can be less visible to drivers, especially in closer quarters and heavier traffic. Three different lighting modes are available: slow blink, fast blink, and continuous lighting.

The helmet is powered by a lightweight rechargeable battery integrated into the helmet. A small charging port on the back is where you plug it in to recharge as needed; a full charge provides between 3 hours (continuous lighting mode) and 6 hours (slow blink mode) time. It’s fully waterproof and storm-ready for all riding conditions.

But wait, there’s more. The Kickstart helmet also offers a few other distinctive and optional features.

First are the helmet’s turn signal capabilities. Yup, with the purchase of a $25 handlebar accessory and remote, you can activate a blinking turn signal on the back of the helmet. While this may provide additional visibility and a warning to drivers that you are turning, it also means strapping the accessory to your bike and activating its left-right push buttons while you’re riding. Given that preparing for a cycling turn also often involves braking and careful navigation, having one more thing to be dealing with seems like a potential distraction. And if you’re wearing gloves (because the dark season also coincides with the cold season after all), it’s that much trickier to operate.

Second, the helmet can be set to automatically light up using all the lights on the back when you brake. This nice automatic feature uses accelerometers in the helmet, which drains battery life faster, and—per the complicated instructions for setting it up—”The automatic warning light feature is still in beta, which means it isn’t always accurate.”

Third, for an extra $40 you can purchase the helmet with an installed MIPS liner on the inside, a safety feature that has proven benefits in a serious accident—definitely worth considering.

To complement the Kickstart—and build on the success of its initial offering—Lumos now also offers the Kickstart Lite ($129), which ditches the extra lights and turn signals on the back of the helmet; the futuristic-looking Matrix ($249), which features a whopping 77 LEDs on the back; and the Street ($229), which is basically the Matrix, but with a lot fewer rear lights.