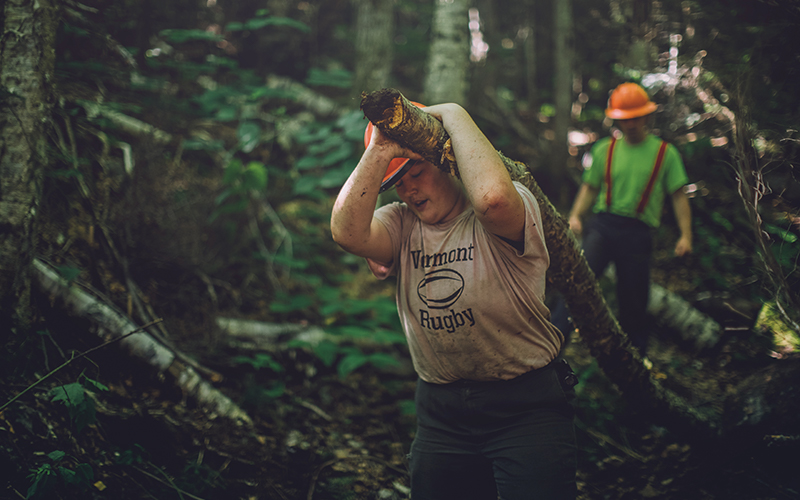 The past few years, as AMC’s White Mountain Professional Trail Crew ventured out to chain saw blown-down trees, clean up eroded footpaths, and repair steps and ladders, the 101-year-old team—which maintains 360 miles of trails in New Hampshire and western Maine—featured as many women as men. This certainly wasn’t always the case. AMC’s trail crew was all male until 1977, when Joan Chevalier, Joy Miller, and Anne Michelac broke through an outdoors glass ceiling of sorts as the crew’s first women. We asked three present-day crew members—Katie McCahan and Cora Honigford, returning for their third year, and outgoing trailmaster Abby Lown—to reflect on what it’s like wielding an ax for AMC.

Why did you apply to be on AMC’s professional trail crew?

Abby Lown: I was at a time in my life where I wanted to challenge myself alongside energetic young people. I knew that working on trails would put me in that environment.
Katie McCahan: I was familiar with AMC from childhood, so I searched for jobs and discovered the trail crew application. It fulfilled a lifelong dream of working in the White Mountains.

What are the most rewarding parts of being on the crew?

Cora Honingford: The people are like your family, which makes it hard to leave. When working alone, though, you learn perseverance in the face of adversity, and it’s so rewarding to think about people using your accomplishments for decades to come.

Lown: The camaraderie and strong work ethic. Pushing yourself alongside others experiencing the same personal growth is rewarding.


How do you navigate the physical demands of the job people may not expect you could handle?

Lown: Women are just as tough, productive, and capable as men. Working in a male-dominated field, my confidence in my physical abilities has risen, which feels significant for my identity as a woman. Success on the crew has to do with grit and the ability to work through problems.
Honingford: Everyone does the same work. As your experience grows, you’re the one setting rocks or building staircases. However, I’ve said it’s important that first-years see women using tools such as chain saws no matter what, and everyone on my crew agrees.
McCahan: Everyone has unique strengths and challenges, facing their own share of mental, physical, and emotional difficulties. These issues are human problems, not gendered, and are respected as such.

Have you experienced any gender stereotyping while on the job?

Lown: Hikers have said to me, “That’s such a big rock for such a little girl,” or “Didn’t your mother teach you not to play with chain saws?” Those comments act as a catalyst for conversations about the work environment we’re fostering in regards to our gender, though, and that motivates us to support each other.
Honingford: There is a recognition that we face different things than men do, though, like when people are hiking by us at work. Women get a lot of people asking if they need help, which is frustrating to hear. They may mean well, but they clearly don’t think you’re capable. It’s equally infuriating to realize that my experience on crew has not been like most women’s experiences. Many had to face macho, misogynistic environments in the past.
McCahan: The only discrimination I have received was hikers asking if I need help, to which I’d like to respond with: Would you ask a carpenter working on a house if they needed a hand? If you feel the need to say something, thank us.

What advice would you give other women considering joining the trail crew?

Lown: Do it. I’ve seen amazingly prolific, strong, badass women and men on this crew. Success is not reliant on your gender. It’s based on your willingness to endure discomfort and your grit.
Honingford: Train hard. It’ll be the hardest thing you’ve ever done, but it’ll be more than worth it.