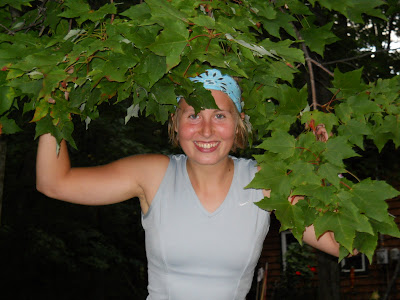 Teaching children to identify trees is an “evergreen” topic for AMC naturalist Meaghan Murphy. During three summer seasons at Mount Cardigan and Pinkham Notch, she’s seen that children enjoy figuring out which tree is which.

Before Murphy teaches children how to find the trees in the forest, she tells them about two types of forest they’ll find in the White Mountains. Mount Cardigan and Joe Dodge Lodge at Pinkham Notch are situated in northern hardwood forest, which contains many types of trees; some lose their leaves in the fall and some stay green. If kids take a trail higher into the White Mountains, they’ll enter the boreal forest, which has fewer types of trees — mostly spruce and balsam fir. Farther north, the boreal forest is often called the “moose-spruce” forest, though moose inhabit New Hampshire’s northern hardwoods forest, too.

With that basic information in mind, kids are ready to do some tree-identification detective work.

Trees with leaves. Trees with needles. Murphy helps kids figure out why trees with big leaves thrive at lower elevations in the White Mountains and trees with needles survive up high. Deciduous trees have broad leaves and lose them as the trees go dormant for the winter. In the spring, they need a lot of energy to start up again, sending out new shoots that will become that year’s leaves. Evergreens have needles, which are modified leaves, and are specifically adapted to survive winter. The waxy coating on needles protects them on the outside, and a thick resin inside acts like an “anti-freeze.”

Flat, friendly fir. Sharp, spiny spruce. Firs and spruce are two common types of evergreens in the White Mountains. Murphy teaches children a mnemonic to tell them apart. She asks them to “pet” the trees and asks, “Do they feel soft and friendly or spiny and prickly?” Next she tells them to take a needle and roll it between their fingers. Is it flat, with edges, or round? A Fir tree has Flat, Friendly needles, and a Spruce has Sharp, SPiny (and round) needles.

Cluster of five. Cluster of three. White pine and red pine often appear together in the northern hardwood forest. Both have flat, friendly needles. An easy way to tell them apart is to count the needles in each cluster. There are five in white pine — and conveniently, “white” has five letters. It would be nice if red pine had three needles to match the three letters in “red,” but its needles appear in clusters of two. Pitch pine, on the other hand, does come in clusters of three needles, and its name gives us a great way to remember this American tree: “Three strikes, you’re out!”

Oaks and maples. One of the easiest ways to tell these two leafy, deciduous trees apart is to look at the ground below them. If there are acorns, it’s an oak. If helicopter seeds, it’s a maple. Kids can double-check by looking at the leaves: oak leaves are typically long, while maple leaves are broad.

Red, sugar, and striped maples. Red and sugar maples grow near each other and have similarly shaped leaves. Telling them apart is advanced tree-detective work. Murphy tells children that the sugar maple is the leaf on the Canadian flag. She has them notice the rounded space — like the “u” in sugar — between its five lobes (the same number of letters in “sugar”). The leaves of the sugar maple don’t have teeth, while red maple leaves have jagged edges and red stems. Striped maple is sometimes called “goose-foot” maple, because its leaves have three lobes. An even easier way to identify this tree is to look at its striped green-and-white bark.

With autumn coming to the northern forests, color will soon be another way to identify trees. Sugar maples will turn orange, red maple a striking red, and striped maple, beech, and birch will turn one of the many shades of autumn yellow.