Mystery of the Mast Year 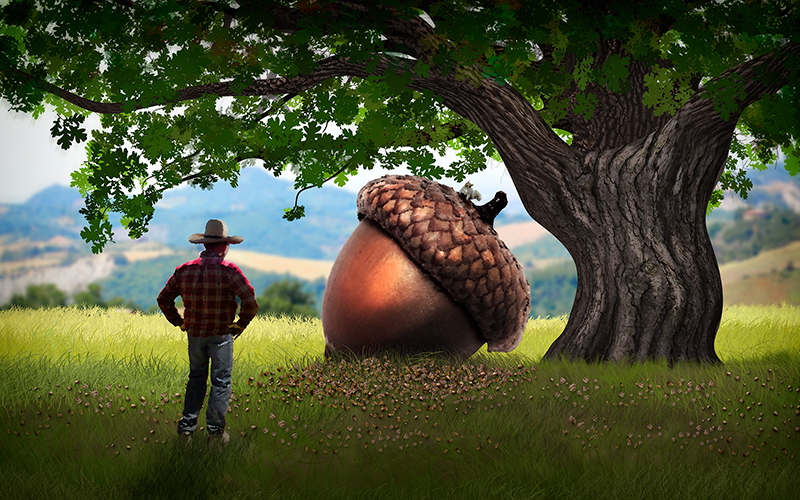 Seeing more acorns than usual? Might be a mast year.

If a lot of acorns are knocking you on the head and crunching underfoot, it might be a boom year for nuts in your neighborhood.

Trees don’t make acorns at a steady pace. Oaks, for instance, “will produce very few acorns for three, four, or five years. Then, all of a sudden, they’ll produce 100 times as many,” says Richard Ostfeld, a disease ecologist with the Cary Institute of Ecosystem Studies in Millbrook, N.Y.

High-production years, known as mast years, mean more nuts escape becoming squirrel food and instead germinate into seedlings—a boon for trees. But Ostfeld’s research has connected acorn-heavy years to a much less attractive outcome for humans: an increase in Lyme disease.

MYSTERIOUS CAUSES
Many types of nut-producing trees experience mast years, including beeches, hickories, and spruces, in addition to oaks. What triggers a mast year remains a mystery.

Through processes that aren’t fully understood, mast years are regional but specific to each type of tree. So, for example, all of the red oaks in a region might crank out a mast crop one year and the white oaks the next. “If we see [a mast year] in the Hudson Valley, most likely we’d [also] see it in western Connecticut, Massachusetts, New Jersey, maybe eastern Pennsylvania, and southern Vermont,” Ostfeld says. The last mast year for both red and black oaks in his New York study area was 2015.

Although weather plays a role in determining the size of the crop, it is not the deciding factor. Scientists believe the ebb and flow of seed production helps trees balance growth and  reproduction. Making nuts and cones requires a lot of energy, Ostfeld explains. Lean years allow the tree to focus on growing. “You can tell by tree rings the years they’ve produced their [mast] acorn crops,” Ostfeld says. “They aren’t growing much.”

Lean years also help control predators. Low-seed years limit the populations of insects, mammals, and birds that eat the nuts and cones. Then, those predators can’t gobble up all of the seeds when a bumper crop does come along.

TICKED OFF
For mice, lots of acorns means lots of babies. When food is abundant, a female mouse can deliver a litter of five to six mice once a month for about a year, Ostfeld says.

In Ostfeld’s research plot in New York, the 2015 mast year led to a massive increase in white-footed mice the following year. These mice are ideal hosts for deer tick larvae. “Mice don’t groom off and kill ticks as well as other hosts,” Ostfeld says. “They don’t really bother with personal hygiene.”

Mice also carry Lyme and other diseases that deer ticks can introduce to humans. The ticks, born disease-free in late summer, are stricken when they feed on the blood of an infected mouse at the larval stage.

The ticks become dangerous to humans when they turn into nymphs, which occurs the following May, June, and July. Based on his previous research on mast cycles and their impact on mice and ticks, Ostfeld expected to see an abundance of ticks and high rates of Lyme infection in 2017, two years after the bumper acorn crop.

Of course, the spread of tick-borne Lyme disease is determined by additional factors, such as weather. But Ostfeld says Lyme infection rises and falls in such direct relation to the acorn crop that he can predict the disease incidence among residents of New York and Connecticut based on his research.

By taking appropriate precautions to avoid ticks, hikers and mountain bikers can still enjoy a positive outgrowth of the 2015 acorn boom. In New York and Connecticut, “You should be able to look around and see a bunch of 2-year-old seedlings from the 2015 mast year,” he says. They will still be small—less than a foot tall—and all about the same height.