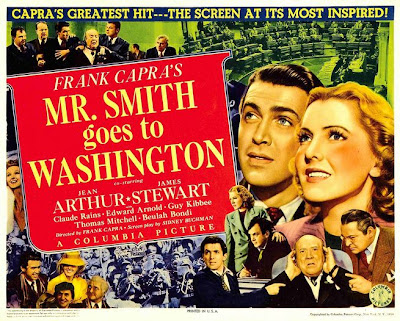 Ursula’s been on a classic movie kick recently, her answer to spring sleet and cabin fever. I’m happy to be complicit. Over the past two weeks, we’ve watched all four melodramatic hours of Gone with the Wind and dallied with several light musicals. The old movie we’ve seen most recently: Mr. Smith Goes to Washington, released in 1939, the same year as Gone with the Wind.

I’d seen Frank Capra’s movie a long time ago. I remembered Stewart’s character, Jefferson Smith, an idealistic young man from a western state who is unexpectedly named to fill a vacant seat in the U.S. Senate. What I hadn’t remembered was that before heading to Washington, young Jefferson Smith headed the “Boy Rangers,” an organization that audiences would have recognized as similar to the Boy Scouts (at that time itself a youthful organization of only 20 years). Smith’s winding path to the Senate begins when the governor’s four sons, Boy Rangers all, tell their father that “Jeff Smith” is the “biggest expert we got on wild game and animals and rocks” and the hero of the moment, because he and his Boy Rangers have just put out a huge forest fire.

Once Smith is installed in D.C., we see him at work on a bill to create a national boys’ camp. The camp would have a grander purpose than simply letting kids run around outdoors. “You see,” Smith says, “if we could take the poor kids off the streets — out of cities — a few months in the summer — learn something about Nature and American ideals…” He has just the place in mind, too — “about two hundred of the most beautiful acres that ever were! Mountains, prairie land, trees, streams! A paradise for boys who live in stuffy cities.”

Smith, it turns out, ascribes to what could be called a naturalist view of American democracy. In this view, the country’s natural grandeur feeds its citizens’ imaginations and independence of spirit. Children acquire a first taste of freedom and possibility in the outdoors. Smith himself learned to appreciate nature from his father: “He used to say to me, ‘Son, don’t miss the wonders that surround you. Every tree, every sunset, every ant-hill and star is filled with the wonders of nature.’ He used to say, ‘Haven’t you ever noticed how grateful you are to see daylight again after going through a dark tunnel?’”

In 1939, the United States was still in the grip of the Depression, one of the longer and darker tunnels in American life, and was being drawn into a dark chapter of world history unfolding across the Atlantic. At the same time, a bitterly divided federal government pitted progressive New Deal crusaders on one side and corporations, capitalists, and citizens who feared the creep of Communism on the other.

In the movie, the idealistic young senator discovers that a businessman who owns most of his state’s newspapers and radio stations — and most of its elected officials, too — has secretly worked out a graft scheme to build a dam in the very place that Smith has chosen for his boys’ camp. Framed and threatened with expulsion, Smith takes to the Senate floor to clear his name, while his Boy Rangers get the true story out at home. The movie was a box-office hit and made a star of James Stewart.

Watching it with Ursula, I was struck by how contemporary its story line felt. (Except, Ursula reminded me, that now Mr. Smith would build a camp for boys and girls.) That got me wondering: Would today’s movie watchers make the same connection between building strong young bodies and creating active young citizens? How would a modern Mr. or Ms. Smith try to bring “the wonders of nature” to the country’s children?

What do you think? Send me your ideas at greatkidsgreatoutdoors@gmail.com. I’ll collect them for a later post.

Learn more
– The script for Mr. Smith Goes to Washington (differs slightly from the film)
– YouTube video clips from the movie: