As part of my ongoing series of Northeast-based outdoor gear companies, I wanted to highlight New England Ropes. Based in Massachusetts since its founding in 1967, New England Ropes today produces the vast majority of its product line at their company headquarters and manufacturing facility in Fall River, Mass. 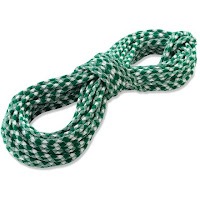 to lariat rope. But in the outdoor world, most people are familiar with their line of climbing ropes, which since 1980 have been marketed under the Maxim brand name.

Their ropes are generally recognized as solid, all-purpose, and reliable—I have an all-purpose 9.8mm, 60-meter Maxim rope myself. Better yet, they produce one of the better value ropes on the market: the Equinox 10.2mm x 60m. This quality dry-treated rope retails for less than $150, a rarity in the $180-$250 world of climbing ropes.

The company has some interesting regional history, as evidenced by their fun and distinctive logo. Founded by a pair of rope makers who spent their early careers with Plymouth Cordage Company of Plymouth, Mass.,

Despite this Teutonic turn of events, New England Ropes continues to operate today in Fall River, where the company employs around 150 people, providing jobs in one of the region’s more economically depressed areas (unemployment currently runs somewhere between 15 and 18 percent).

Next time you’re shopping for a climbing rope (or quality lariat), think New England Ropes—support local jobs while you head for the crags!