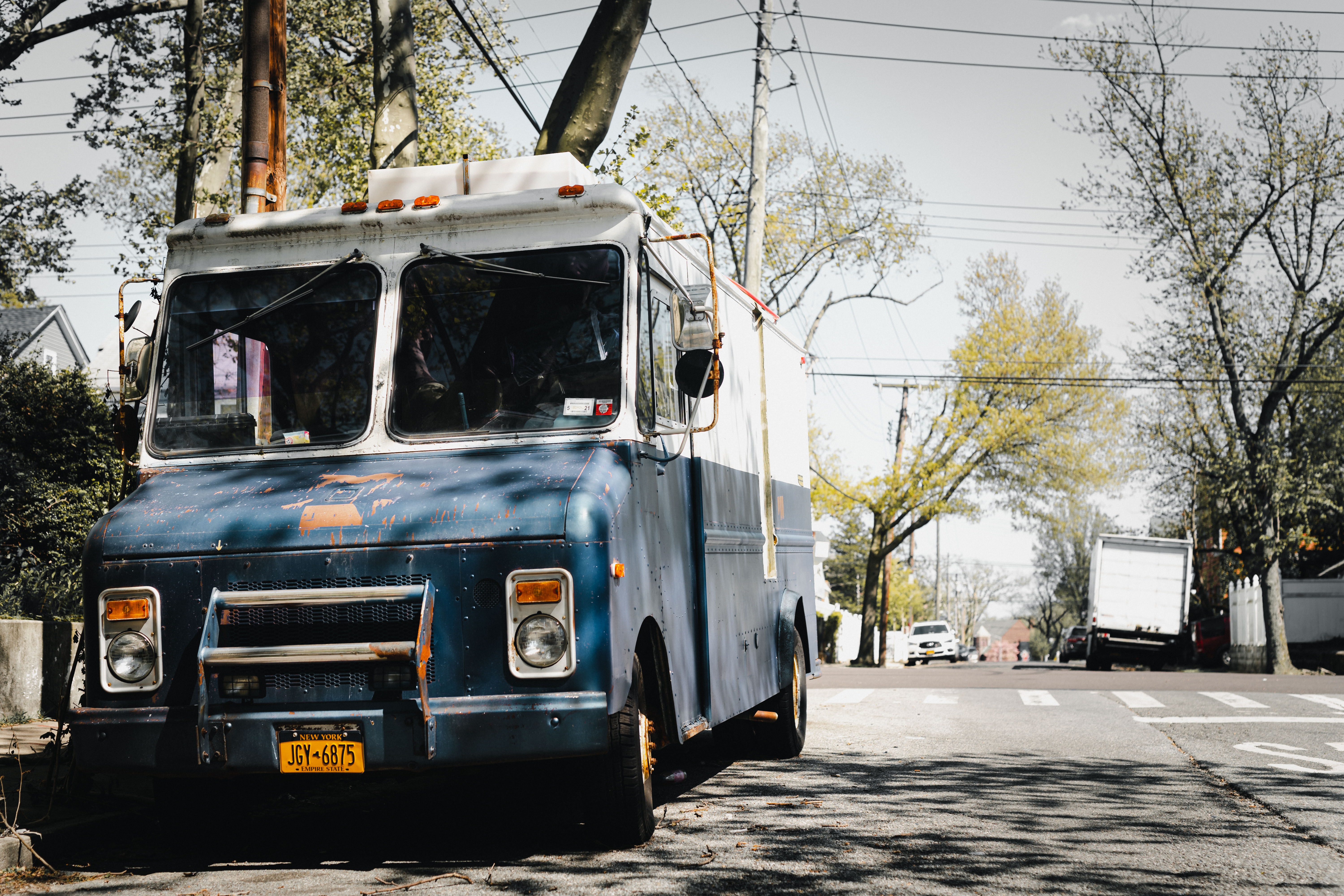 Victor Amenze / UnsplashOnce a program in two New Jersey cities to provide free or low-cost electric trucks takes hold, gas-powered commercial trucks like this one may be no more.

As electric vehicles are increasingly being seen as a way to reduce carbon dioxide emissions that cause climate change, one category of vehicle has seemed to lag behind: trucks. But now, many electric truck models—including Ford, General Motors, and Tesla—are set to become available in the next few years.

And soon, some New Jersey businesses will be able to get these trucks for free.

A new $15 million state program, dubbed New Jersey Zero Emissions Incentive Program (NJ ZIP), will provide vouchers ranging from $25,000 to $100,000 each to qualifying businesses and organizations in greater Newark and Camden to purchase class 2b to class 6 medium- and heavy-duty vehicles (MDHVs)—that’s anywhere from a pickup truck to a small box truck.

The New Jersey Economic Development Authority (EDA) is administering the program as part of the state’s transportation electrification goals, which have spurred some of the biggest electric vehicle incentive programs in the country in recent years.

New Jersey is committed to 100 percent clean energy by 2050, and electric vehicles are a crucial part of meeting that goal, since 42 percent of the state’s greenhouse gas emissions come from the transportation sector. And nationwide, MDHVs contribute 23 percent of greenhouse gas emissions in the transportation sector, according to the U.S. Environmental Protection Agency.

Importantly, NJ ZIP also focuses on equity and environmental justice. Vouchers in this pilot will be limited to the greater Newark and Camden areas, two cities classified by the state as “overburdened” by transportation emissions—and that have populations that are majority people of color. Small businesses and women-, minority-, and veteran-owned businesses can also receive bonuses in addition to the vouchers.

“[NJ ZIP] is a shining example of the direction the state is moving and how the state is centering on transportation electrification and equity,” says Eric Miller, New Jersey Energy Policy Director for the Natural Resources Defense Council (NRDC).

The voucher application will open later this year—but so far, the program has been well received by the community. “We’ve been getting a ton of inquiries already,” says Pallavi Madakasira, who oversees the program as EDA’s Director of Clean Energy. “Generally speaking, it’s been very positive.”

NJ ZIP is the first program in New Jersey focused on MDHVs to be funded by the Regional Greenhouse Gas Initiative (RGGI), a cooperative effort of several New England and mid-Atlantic states that raises funds for clean energy programs by auctioning allowances to emit greenhouse gases to power companies. AMC has been a long-time supporter of RGGI.

New Jersey was one of the original states to join the RGGI coalition in 2005, but former Governor Chris Christie, a Republican, withdrew the state from the agreement in 2011. Under Democratic Governor Phil Murphy, who was elected in 2018, New Jersey officially re-joined RGGI at the beginning of 2020, a move that AMC supported.

The EDA now receives 60 percent of the state’s RGGI funds, with 75 percent of that share dedicated entirely to transportation electrification programs like NJ ZIP. The other 40 percent of RGGI funds go to two other state agencies—the Board of Public Utilities and the Department of Environmental Protection—to fund other transportation electrification programs, including an initiative offering incentives for purchasing electric passenger vehicles and a program to build more charging infrastructure.

“The central goal for [EDA] is to make sure that the state has an overarching strategy when it comes to medium- and heavy-duty vehicles,” Madakasira says.

Establishing these goals across different collaborating agencies started with the state’s 2019 Energy Master Plan, a process that engaged stakeholders and environmental advocates, including the NRDC. “I think they really listened,” Miller says. 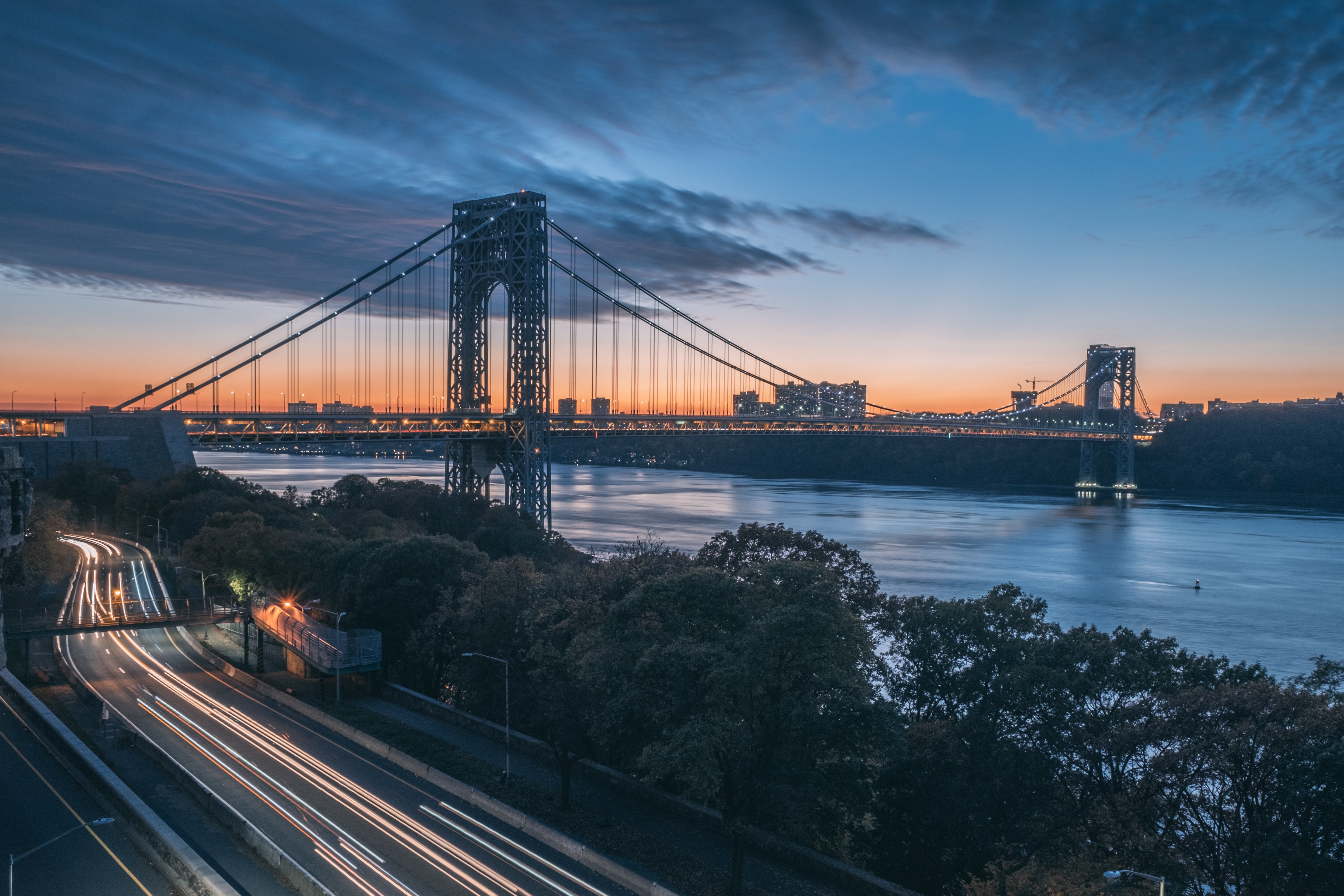 Bryan G. / UnsplashThe George Washington Bridge between New York City and New Jersey. Will the Empire State follow the lead of the Garden State in its electric vehicles program?

A few hundred electric trucks on the road won’t make any noticeable impact on greenhouse gas emissions and climate change. But the hope is that after this pilot program, EDA and other agencies can continue using RGGI funds to expand to new regions of the state and different types of vehicles, as well as offer different types of incentives.

“This program alone won’t make us reach our goal, but it’s a really good start,” says Miller of NRDC. “I see it more as jumpstarting the market in New Jersey…This is the kind of stuff we need to do to ramp up bigger programs.”

That expansion may include offering vouchers for heavier duty electric vehicles—like tractor trailers, dump trucks, and large buses—once they come onto the market. Madakasira explains that when these vehicles do become available to purchase, there will be more logistical challenges for EDA and other agencies to consider as they roll out new programs funded by RGGI.

“As we go to heavier truck programs, we want to take a more holistic view in acknowledging that you need to install custom charging infrastructure to help support” heavy duty vehicles, Madakasira says.

In the meantime, the pilot of NJ ZIP will serve as a starting point that New Jersey can learn from moving forward.

“In the last two years, New Jersey has really moved the ball forward on transportation electrification,” Miller says. “But we need to go even bigger in 2021.”