“Out there on the trail, we’re together” 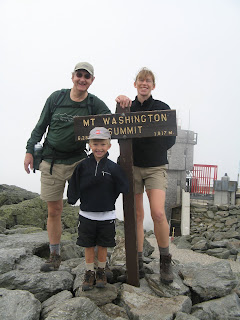 When Eric Stones, a volunteer leader of family outings for AMC’s Connecticut Chapter, thinks back to his childhood in England, he remembers three things his father often did with him: “taking me to hear music, taking me to cricket matches, and taking me hiking.”

Now a long-time resident of the United States, Eric admits that it is hard to continue an interest in cricket on American soil, but the other two activities “rubbed off on me.”

“On Sundays we would go to church, where father would sing in the choir,” Eric says. “Then in the afternoon, we’d go walking along the public paths.” The family lived near the West Penine Moors. “It was all factory chimneys to the south and moors to the north.” For family vacations, “we never did anything but visit farmhouses and go hiking.”

Stones has carried along those two traditions with his four children. The three oldest are now adults, but Eric still has the youngest, Roderick, who is 6, at home. On Sundays, Eric says, “I sing in the church choir. Then we gather all our things together and go hiking.” Eric, his wife Linda, and Roddy live opposite a state park. Eric and Linda lead at least one hike a month with the chapter, and Roddy comes on most of them. “He’s quite the little hiker,” Eric says. “He has 20-odd peaks under his belt.”

Roddy climbed Mt. Washington last summer, at age 5. The main thing, according to his father, was keeping him engaged enough not to start thinking about whether he was tired or when they would get there. The result was “four hours of non-stop talking.” Eric asks, “When else do we devote that much time to talking to each other?”

Extending the question, he asks, “What things do families really do well together? People spend so much time driving kids to cheerleading and cello, to this game and that game. The nice thing about hiking, you’re doing something together. Out there on the trail, we’re together.”