Over the River and Through the City: 8 City Snowshoe Routes 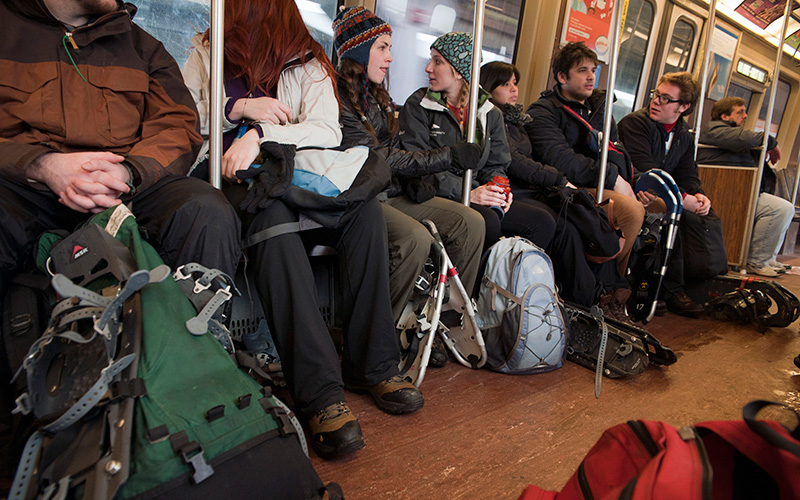 Winter might make our daily commutes more challenging, but it also brings adventure much closer to home. A few inches of snow can turn your local park into an invigorating day hike. Grab your pack and your snowshoes; hop on the bus, the train, or maybe just stroll to the end of your block; and enjoy these urban snowshoe hike.

1. MACKWORTH ISLAND  |  Falmouth, Maine
Located across Casco Bay from downtown Portland, Mackworth Island provides more than a mile of bayside snowshoeing. A causeway connects the island to the mainland, and visitors can park in the lot just beyond the island’s gatehouse. (A small fee is required.) The wide, level trail begins and ends at the lot and traces the perimeter of the island. Stop at one of the waterfront benches for a snack and a quick rest before completing the circuit. If the snow isn’t too high, look for petite fairy houses nestled at the bases of some of the trees.

2. DERRYFIELD PARK  |  Manchester, N.H.
Derryfield Park, one of New England’s most challenging cross-country running courses in the fall, becomes an ideal urban snowshoeing retreat in winter. From the baseball field parking lot on Circular Drive, head north for a wooded, 2-mile loop around the Oak Hill Reservoir. The trail climbs sharply to the reservoir and loops into the woods beyond, continuing all the way to the edge of McIntyre Ski Area, a small downhill ski and tubing facility. On the return trip, the trail passes historic Weston Observatory. Now closed to the public, the 19th-century public lookout tower also was used as a spotting post in World War II.

3. MIDDLESEX FELLS RESERVATION  |  Medford, Mass.
The Middlesex Fells Reservation spans more than 2,500 acres on both sides of Interstate 93, just north of Boston. With open fields, broad paths, and single-track trails, there’s something here for everyone. For a hilly, scenic loop on the eastern side of the reservation, head to the Rock Circuit Trail. A short road connects the parking area on Woodland Road to the trail. At the junction, follow the white blazes in either direction to complete the loop. Be sure to pause long enough at Boojum Rock and again at Pinnacle Rock to take in the views of Boston’s skyline. You can reach the Middlesex Fells by subway (MBTA Orange Line), bus (route 100 from Wellington Station), or car from I-93.

4. ARNOLD ARBORETUM  |  Boston
Nestled in Boston’s Jamaica Plain neighborhood is one of the finest tree collections in the country, the 281-acre Arnold Arboretum. The main pathways through the arboretum are plowed in winter, but open fields and wooded paths provide plenty of snowshoeing options—just avoid shrubs and planting beds. The conifer collection, located off Centre Street on the arboretum’s western edge, is particularly beautiful in winter. Tromp across glades beneath snow-dusted firs, spruce, and hemlock, gathered from around the world; nearly 600 varieties reside here. Venture up nearby Bussey Hill to view downtown Boston across the treetops.

5. WEST HARTFORD RESERVOIR  |  West Hartford, Conn.
With 3,000 acres of forest and more than 30 miles of trails and roads, including a stretch of the New England Trail (known as the Metacomet Trail on this section), West Hartford Reservoir is a great urban escape in summer or winter. From the public lot off of Farmington Ave./Route 4, snowshoers can pick up either the Red Road Loop (3.4 miles) or the Yellow Loop (2 miles) behind the water treatment facility. The trails loop back into the woods, along and around several reservoirs. For an extra challenge, connect to the New England Trail from the Red Road Loop and head out along the perimeter of the property.

6. CENTRAL PARK  |  New York
The fields, hills, and forests of Central Park offer infinite winter adventures. To make the most of your outing, traverse the park diagonally from West 59th to East 110th streets. From Merchants’ Gate on Columbus Circle, start by hiking parallel to West Drive then cut across the Sheep Meadow and detour up to Summit Rock for a view of the city. From there, trace the western shore of the reservoir before making your way over to East Drive, passing Conservatory Garden en route to the exit at Duke Ellington Circle. Or make up a route that hits your own favorite park highlights.

7. PROSPECT PARK  |  Brooklyn, N.Y.
NYC residents have several snowshoeing options a short subway ride away, including Brooklyn’s 585-acre Prospect Park. Designed by the Olmsted brothers in 1859, the park is now home to Brooklyn’s only forest. Explore the relatively flat Lullwater and Peninsula paths around Prospect Lake, on the property’s eastern side, then make your way to the centrally located ravine, just west of Center Drive. There you can tromp alongside the forest’s streams and waterfalls before returning to the bustle of the city.

8. WISSAHICKON VALLEY PARK  |  Philadelphia
With 57 miles of trails, Wissahickon Valley Park is a year-round haven for outdoor lovers in the Philadelphia area. Single-track trails wind up and down both sides of the gorge, providing a surprising challenge for snowshoers despite their proximity to the city. Start at the trailhead on Crefeld Street and follow the Lavender Trail (its blazes match its name) into the old-growth forest. To make a 7-mile loop that covers both sides of the gorge, follow in sequence the White, Green, Yellow, and Orange trails before returning to the Lavender Trail. For an easier option, follow Forbidden Drive along the base of the gorge. The trailhead is accessible by train (SEPTA R8) and bus (route 23).