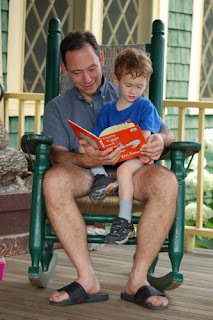 If you’re the parent of a child in a certain age range, chances are you’ve looked into summer camps. And for good reason: Summer camps expose children to new experiences, give them the chance to build self-confidence and lifelong friendships, provide helpful structure, and get them out into the fresh air.

We’ve come to think of “camp” as something that children do. But family camps have an even longer tradition in this country — and the experience of a family spending time together in a camp setting in the outdoors is as relevant today as it was a century ago. Ironically, this old tradition can even address some of the issues confronting modern families.

“Of all the AMC institutions, only a couple have been in existence longer than our family camps,” says Roger Scholl, AMC’s director of chapter and volunteer relations. These volunteer-managed camps, which attract families year after year, are direct descendants of the club’s “August Camp,” which began in the late 19th century. All three full-service camps first served as bases for that moveable feast of outdoor recreation. The camp at Three Mile Island on Lake Winnipesaukee came under AMC ownership in 1900, after AMC “trampers and campers” visited the site during August camp. AMC bought the land near Evans Notch that became Cold River Camp in 1919, the same year that the neighboring White Mountain National Forest was created, and created Echo Lake Camp on Maine’s Mount Desert Island in 1923. 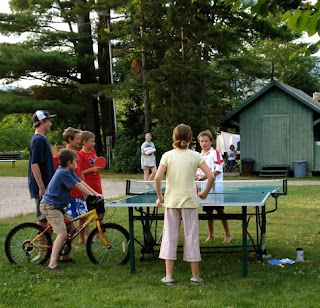 Lillian Buck, who grew up spending summers at both Echo Lake and Cold River camps, where her father was a trip leader, is the current registrar for Echo Lake Camp. She notes the similarities between family and kid camps: “Everyone arrives at the same time,” usually on a Saturday, and receives the same first-day introduction to the camp’s traditions, usually during an evening gathering. The traditions include morning reveille at Three Mile Island, a lobster picnic at Echo Lake, talent nights and square dances. Life in family camps revolves around the outdoors, with hiking, canoeing, and kayak outings guided by AMC trip leaders. Rustic accommodations — cabins or platform tents lit only by lanterns or flashlight, outhouses and “sun” showers or shared bathhouses — maintain the feeling of “life lived outdoors,” and large dining halls and common areas bring people together. “The camp environment provides a great way to be together as a family, but part of a larger community, too,” Buck says. “By the end of the week, you know everyone.”

Over the years, Buck has noticed a generational rhythm to the family life in the camps: “We see a family come and fall in love with camp. They come back and they bring their kids’ friends or invite other families. When the kids grow up, there will be a while where we don’t see the family. Ten years down the road, we’ll see the older couple again with their grown-up children and grandchildren, or they come alone with the grandchildren. It’s like watching the turning of the great wheel of life.” 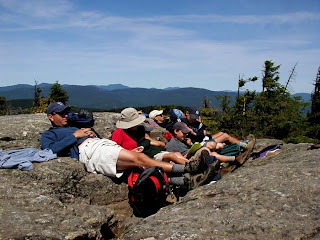 Sharing a week or two at family camp addresses a variety of modern family needs. Grandparents can come to family camp with young children, knowing that others in the community will be looking out for their safety, as well. Buck has seen family camp help families after divorce, bringing non-custodial parents and children together in a comfortable, yet structured, setting. The rustic facilities make it easy — even necessary — for children and parents alike to unplug from phones, computers, televisions, and other electronic stimulation. Older children, and especially teenagers, can stretch their independence and explore more widely within the protective framework of the community. “Kids,” says Buck, “can feel like they’re members of more than one family.”

Roger Scholl says it’s an easy vacation to plan and enjoy: Just “eat, sleep, and recreate” in a beautiful natural setting. But something deeper may be happening to those families amid the simplicity.

Psychologist and writer Mary Pipher, author of Reviving Ophelia and other books about parenting and community, offers parents three steps to creating strong bonds with their children: Keep screen time and other electronic distractions to a minimum; eat family meals; and take family vacations. Family camp does all this, and one thing more. AMC members knew a century ago that coming together in regular outdoor community helped develop and transmit important conservation values. Family camps share, celebrate, and pass along a love of the outdoors from one generation to the next.

In addition to its volunteer-managed family camps, AMC offers several week-long family adventure camps led by AMC staff at its lodges in New Hampshire and Maine. These staff-led camps offer a range of guided activities, including hiking, paddling, rafting, fly fishing, and hut overnights, based on location.