Pennsylvania Lanternfly: How Scientists Kill and Contain Invasive Species (Or Try, At Least) 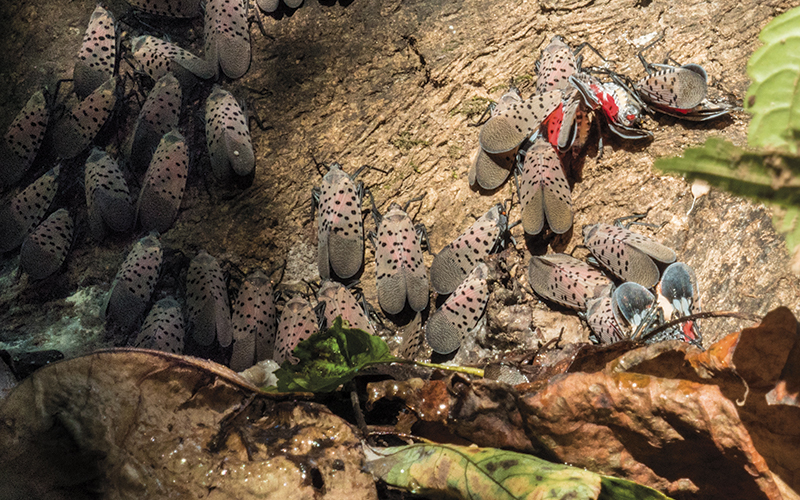 Visitors leaving the eastern Pennsylvania wilderness could find they’ve picked up a hitchhiker—or 20.

A large swath of the state, from the Poconos to Philadelphia, has since 2017 been under quarantine for the spotted Pennsylvania lanternfly—an invasive, plant-hopping bug that threatens $14 billion worth of crops and hardwoods in the Keystone State. As researchers work to find an effective way to kill and contain this bug, several state and federal agencies are working to keep the bug from spreading beyond a 14-county region.

Whether it’s the East Coast gypsy moth infestation a century ago, the emerald ash borer wreaking havoc in the East and Midwest in the early 2000s, or the newer threat the lanternfly poses, invasive species frequently have the early upper hand because of the speed at which they multiply and a lack of natural predators in their new environment. That often sends researchers scrambling to catch up. That’s been the case with the lanternfly, first discovered in Pennsylvania in 2014, but whose population expanded so rapidly that researchers couldn’t contain it. Swarms of lanternflies are seriously damaging and killing trees and plants across the state by excreting a sugary substance when they feed that encourages the growth of mold.

In every new case of an invasive species, scientists respond based on a national protocol, according to Samantha Simon, invasive species coordinator with the United States Department of Agriculture. Scientists then tailor that response, based on the severity of the threat.

“We have a lot of research based on prior invasions that gives us tools to help in the next case,” she says. “We are always evaluating to make sure our response is effective.”

Most of that response involves quarantines and public outreach, so that a new pest is not unwittingly introduced to even more areas. Adult spotted lanternflies, for instance, lay egg masses on trailer hitches and tree bark, so outdoor users play a key role in preventing its spread by checking their equipment and vehicles for invasive species and not moving firewood from one place to another, officials say.

“We have so many pests and diseases that are easily moved by people,” Simon says.

When the spotted lanternfly was first discovered, officials in Pennsylvania worked quickly to put a quarantine in place and start a concerted public education outreach. They’d learned from the emerald ash borer infestation years earlier the importance of acting quickly, said Shannon Powers, spokeswoman for the Pennsylvania Department of Agriculture.

“It was so widespread,” she recalls, “that it was really too late to implement an effective strategy.”

While Pennsylvania has operated a quarantine for more than four years with spotted lanternfly, the bug, with its distinct spotted forewings and red hind wings, has still spread beyond state lines. Confirmed populations have been found in New York, Delaware, and Virginia. In each case, a member of the public unknowingly brought the bug to the new location.

Businesses located in the quarantine zone are now required by state regulations to inspect their vehicles and shipments for lanternfly—no small task given the sheer volume of truck and rail traffic in the region. Still, the state has issued more than 1 million permits to businesses and their employees, Powers says.

Despite everyone’s best efforts, though, Heather Leach, an extension associate with Penn State Cooperative Extension who is leading the public outreach on spotted lanternfly, says the lanternfly is likely here to stay—like it or not.

“We are trying to slow down the movement,” she says, “so that the research can catch up.”