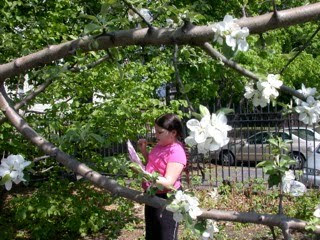 In my previous post, I described an emerging trend in “adventure playgrounds.” We’ve had our own playground adventure here in rural New Hampshire. The small school that Ursula and Virgil attend, Crossroads Academy in Lyme, decided last year to dismantle its playground. Out would go the slide, the jungle gym, and the monkey bars that occupied a crowded corner of the schoolyard. (A sandbox, a small wooden cabin, and two swing sets would stay.) Over the summer, 60 volunteers — parents, teachers, school administrators, and children — did more than replace the old equipment. But before I explain what they did, I should give you some background.

First, more about the school: Crossroads is a small private school that teaches some 130 students from kindergarten through eighth grade. The school occupies four buildings on 140 acres, most of them wooded. Over the dozen years that the school has owned the property, parents and faculty have cut trails along the brook that winds through it. Each spring, fifth graders release salmon into the brook, an activity that is part conservation, part science. 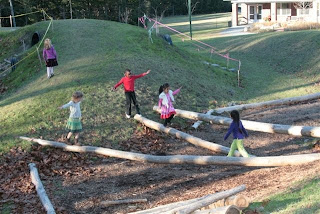 In other words, the school was already justifiably proud of its connection to a natural environment. It wasn’t obvious that there was a reason to do more. But one of the parents, a Rhode Island School of Design grad and director of a summer camp who had been following the trends in playgrounds, came to the head of the school with a plan. Janna Genereaux wanted to combine the theory of “loose parts” that animates David Rockwell’s Imagination Playground and the collaborative design and construction of KaBoom! with another emerging concept, that of outdoor classrooms.

Outdoor classrooms incorporate a rich outdoor environment into a school’s core curriculum. The Boston Schoolyard Initiative (BSI), in collaboration with the City of Boston, has renovated 78 schoolyards around the city, building outdoor classrooms in 26 of them. The organization takes the position that schoolyards are different from parks and playgrounds. Their proximity to one of the crucial tasks of childhood, going to school, makes schoolyards natural places to bring together recreation, creative play, and academic learning.

Over 15 years of collaboration with teachers and communities, BSI has developed materials and guidelines for making outdoor classrooms work. The outdoor spaces need to be large enough for an entire class to congregate, but should also have dispersed seating that allows smaller groups of students to sit and work. Plantings are designed so students can observe seasonal changes and find flowers, berries, or buds throughout the year. BSI has developed a series, Science in the Schoolyard, that helps teachers develop outdoor lessons and offers tips for outdoor classroom management. BSI completed 6 projects in 2010 and has 3 scheduled for 2011. According to BSI’s executive director, Myrna Johnson, two more rounds of funding will allow the public-private initiative to reach every elementary and K-8 school in Boston.

At Crossroads, Genereaux wanted to do more with the school’s abundant natural space. She especially wanted to incorporate a small hill and grassy swale below a stand of oak trees, none of which were part of existing play patterns. The school agreed to remove the existing playground, and parents signed up to help. Over the summer, under Genereaux’s direction, earth-moving equipment dug through the hill, installed two culverts, and refashioned the hill over the tunnels. The group thinned the wooded buffer between the hill and the brook, opening up a view of the water. They sliced some of the trees into rounds of different widths, cut their branches into sticks of various lengths, and stacked the loose parts under the trees. To these they added piles of smooth stones. They tied ropes around a couple of the oaks so that the ropes extended down the hill toward the tunnels. Total cost: less than $5,000. The new natural playground was dedicated following the first week of school. Already children had created teepees of the sticks and paced out additional rooms using the paving stones. They’d tied logs to the ropes and hauled them up the hill.

The playground continues to evolve. Later in the fall, acorns became a bumper crop, the kids collecting them as fast as they fell from the oak trees and using them to plot out rooms in outdoor houses and line new roads. Teachers left bins at the trees with plastic figurines from historical eras that children study at Crossroads. Soon medieval knights on horses clashed on the hillside with ancient Egyptian and Roman warriors.

Teachers watched over the activity but left the children to negotiate their own rules of play. Structures and creations stayed up until kids tore them down for new projects. The second grade spent more time at the newly accessible brook, observing how it changed from week to week.

Genereaux wasn’t surprised by the success of the new play area. “There’s more and more science supporting what we’re trying to do here,” she said. “But really we’re just letting kids do what has always come naturally to them. When we give children freedom, it compounds like interest.”