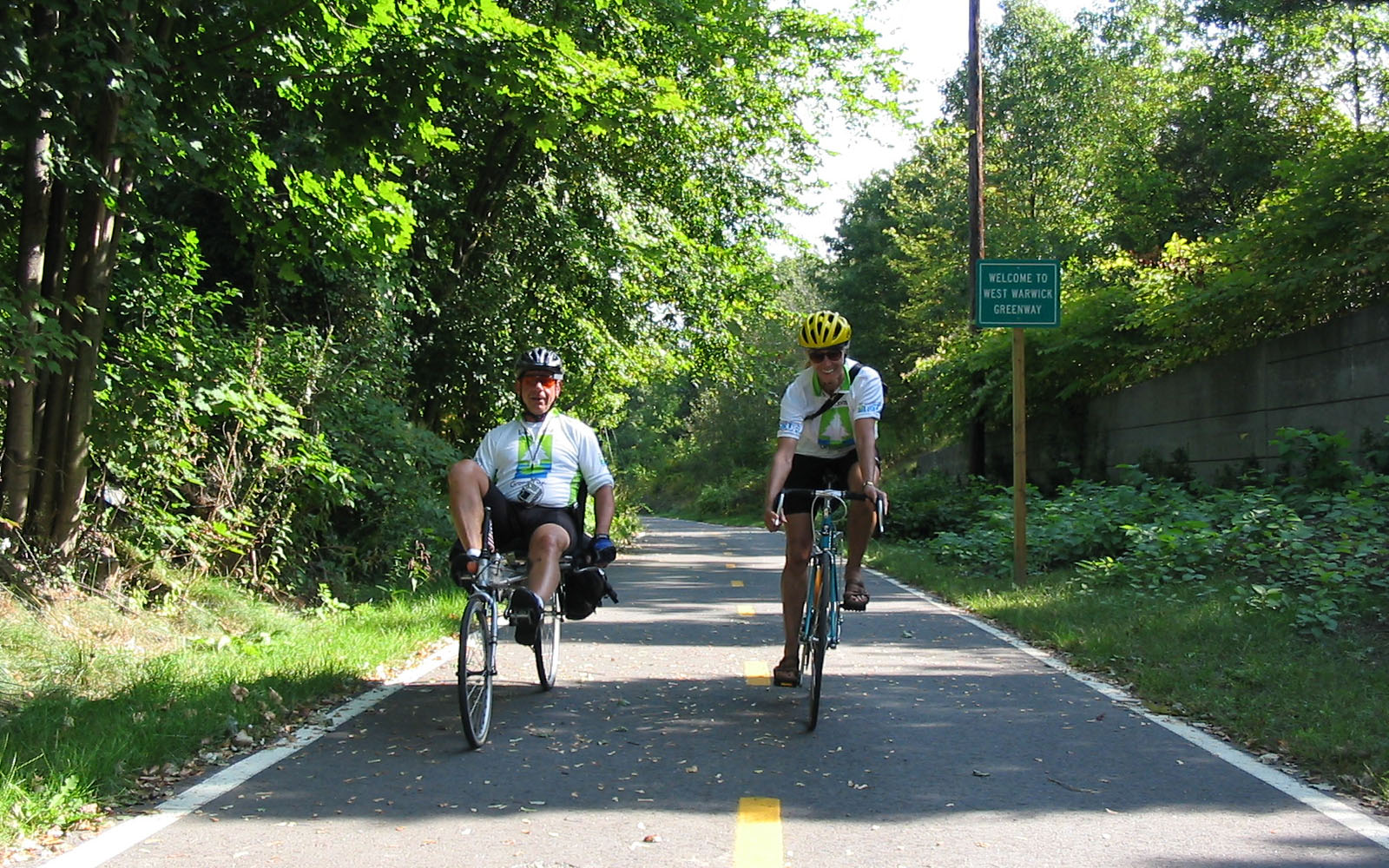 East Coast Greenway AllianceThere are many opportunities for great paddles, bikes, and hikes in Rhode Island—like this stretch of the West Warwick Greenway.

With nearly 400 miles of coastline, it’s easy to understand how Rhode Island got its nickname, “the Ocean State.” Horseshoeing around Narragansett Bay, the U.S.’s smallest state provides plenty of places to explore, both on land and sea. Whether it’s hiking, biking, or paddling you’re looking for, Rhode Island has you covered. Add one or more of the six destinations below to your itinerary when planning your next outing and be sure to check out AMC’s new Rhode Island Recreation Map & Guide for more ideas.

1. HIKE GEORGE B. PARKER WOODLAND WILDLIFE REFUGE | Coventry, R.I.
Hikers step back in time on a trail network that follows an old carriage road from the American Revolution. Take the Coventry and Foster trail loop following blue then orange blazes past stone walls, boulders, streams, and rock mounds—the latter built either by American Indians or colonists and which historians believe to be have been used as early trail markers. You’ll cross several boardwalks and bridges, and you may even encounter owls, deer, fish, and foxes if you tread quietly. To reach the refuge from Interstate 95, take exit 5B to Route 102 and continue until you see the trailhead off Maple Valley Road. Trails are open dawn to dusk; there is no overnight parking.

2. HIKE MOUNT TOM | Saunderstown, R.I.
Turn onto Mount Tom Road from Route 165 and you will find parking 0.7 miles to the left. The trail contains several lookout ledges and beautiful cascades created by the Parris Brook. Follow the white-blazed Mount Tom Trail until you reach a dirt road. Turn left here and continue straight for a few hundred yards before picking up the white blazes and continuing into the woods. Be careful: The white blazes may blend in with the lichen on the trees, and you can easily end up on the wrong trail. In 1.8 miles, you’ll reach the summit of Mount Tom and can either return the way you came or continue on the white-blazed Escoheag Trail, looping to Sand Hill Trail, and back to Mount Tom Trail to your car. This area is popular among hunters September through February, so be sure to check hunting-season dates and wear blaze orange.

3. BIKE EAST BAY BIKE PATH | Eastern Rhode Island
This peaceful and relatively flat bike path gives you a taste of just about everything Rhode Island, from rivers to forests, marshes, cityscapes, and plenty of views of Narragansett Bay. The path begins in East Providence, about halfway between Interstates 95 and 195, and travels through the towns of Barrington, Warren, and Bristol, alongside an abandoned railroad track once home to the Providence & Bristol Railroad. Ride at your own pace, stopping for seafood or a break in Bristol’s Independence Park, before heading back the way you came. On bike, the path can be completed in about 6 hours.

4. BIKE WASHINGTON SECONDARY BIKE PATH | Central Rhode Island/South Providence
On this picturesque path, bikers ride through busy, urban streets and scenic, rural fields, with sights of the Pawtuxet River along the way. Three miles of the path are designated as the first Rhode Island segment of the East Coast Greenway, a project that eventually will connect 3,000 miles of protected biking routes from Florida to Maine. For this stretch, start along Garfield Avenue in Cranston, and follow a mostly flat, paved, 19-mile route to Log Bridge Road, near Summit General Store in Coventry. Turn around there for a long but rewarding day.

5. PADDLE THE PAWCATUCK RIVER | Southern Rhode Island
Running southwest through Narragansett Bay, this onetime hotbed of shipbuilding is now one of the cleanest rivers in all of Rhode Island. Paddlers pass historical sites such as Great Swamp Management Area, where a battle between colonists and the Narragansett people occurred in 1675, during King Philip’s War. Marine species, such as herring fish and American eels, are also abundant along the route. Park at either the Bradford Boat Launch or Westerly Boat Launch and start your journey upriver. Minimal current along the 17-mile stretch means you won’t have to work extra hard to paddle back to your starting point, but you might want to spot a car at both ends to avoid a 34-mile round trip.

6. PADDLE NINIGRET POND | Charlestown, R.I.
This 11-mile waterway—separated from Block Island Sound by a long, skinny land barrier—is the largest salt pond in southern Rhode Island. Due to its natural protection from the Atlantic, Ninigret is a great spot to try gentle saltwater paddling—or continue past Ninigret Conservation Area to Charlestown Breachway and access the open ocean. Parking is located in Ninigret Park off Route 1 in Charlestown, and there’s canoe/kayak access via the conservation area.

Lily Hartman is the editorial intern at AMC Outdoors magazine.