Seashells in Their Pockets: Exploring the seashore with children 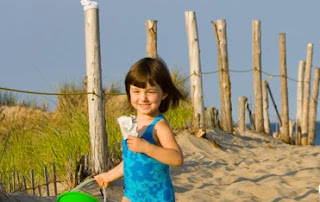 Growing up along the Maine coast, Judith Hansen came to love the smell of salt in the air, the sound of waves against a rocky shore, and the ways of shorebirds and other coastline animals. Even before her son Justin could walk, she introduced him to the same pleasures. “I kept looking for a guidebook that was sturdy enough to take to the beach,” she says—and one that followed environmentally sound principles. When she couldn’t find any she liked, she decided to write her own guide, and asked her cousin, illustrator Donna Sabaka, to create drawings for it.

The child for whom Judith Hansen wrote that guidebook is now a grown man. AMC first published Seashells in My Pocket in 1988, when Justin was 6. The current third edition describes more than 200 plants, shells, and animals that can be found along the Atlantic coast between Florida and Maine. The final pages still contain a Sea-Searchers Award for children who identify every creature and plant in the book

Adults at the beach, Hansen says, “have a tendency to look out over the water or down at the sand.” Going to the beach with children often means exploring smaller places. “It’s also fun to sit down and find out how many things you can find in one square foot.” Bring magnifying glasses, spoons, and containers along with the beach towels, sunscreen, and water.

Hansen encourages adults to explore the treasures of the sea through a child’s eyes:

Tide pools and other small ecosystems. “Tide pools are teeming with life,” Hansen says, from water animals so small they can’t be seen without a magnifying glass to starfish and sea urchins. “I can easily spend more than an hour exploring a tide pool.”

Snail trails. Snails are famous for being slow, but they’re quick to pull inside their shells if they sense danger. If you hum while holding a snail in your hand, the “good vibrations” can sometimes entice the snail to peek out from its shell.

Stay-at-homes and headstanders. “Every person has a story,” Hansen says, “and every living thing does, too.” She especially likes to tell children the stories of easily missed animals like limpets and barnacles. Limpets, which have shells that form a cone-shaped “hat,” hardly ever move once they attach to a rock. And a barnacle spends its entire adult life standing on its head.

Over the years, Hansen has also developed several easy guidelines for protecting the seashore’s treasures:

Leave animals where they live. Hansen is heartened that in the quarter century since she started working on her guidebook, seashore visitors have become much more careful about not collecting living things. Hansen goes further and explains the importance of leaving animals where you find them. “Some animals live at the low tide line,” she says, “others at the high tide line. The difference between the two may be only 4 or 5 feet, but it can be the difference between life and death for these creatures.”

Observe more than you collect. Hansen understands the pleasure of stuffing small pockets with half-shells—it’s what gave her book its name. She’s learned, though, that even young children can understand the importance of leaving the treasures of the sea for others to enjoy.

Create seashore art. Use shells, seaweed, driftwood, and more to decorate sand castles (and let the tide redistribute the wealth). Take pictures of sand castles or of collected seaside treasures. At the end of a weekend, or a summer, put the snapshots in a scrapbook.

Bring home the trash. Any time Hansen goes to the seashore, she takes along an extra plastic bag to pick up trash left behind by careless visitors or carried in by the tide.