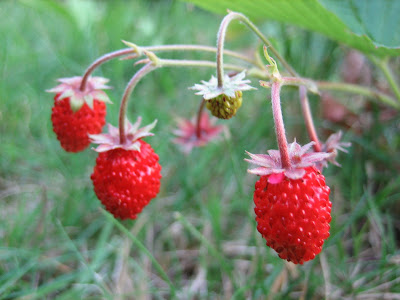 “Strawberry moon” is the name the Algonquin gave the first full moon of summer. Here at Orange Pond, we can see why: The meadow by the pond is full of ripe red berries. These are wild strawberries, not the plump mouthfuls we buy at the store or at pick-your-own places. Even ripe, they’re often no bigger than a pencil eraser, and more tart than sweet.

Like many wild things, wild strawberries aren’t easy to see, even when they’re everywhere. The other day I showed Ursula and Virgil how to look under a plant’s dark green, sawtoothed leaves to find the berries beneath. Once we trained our eyes to spot red below the first layer of vegetation, we could tell that the field was full of strawberries.

Even so, our bounty didn’t fill one small bowl. We picked off the berries’ elven green caps and popped the berries into our mouths. We left the house with an empty bowl and returned with one, too.

I hope that we have a clear night for the full moon on Saturday. I’d like us to go back out to the field in the moonlight. I learned to do this by reading “Moon Magic,” an essay in The Singing Wilderness by nature writer Sigurd Olson. In the essay, he described the strange behavior — a restlessness, even dangerous abandon — he saw in wild animals on full moon nights. Here he is watching a deer mouse clamber up the side of his tent on one moonlit night:

Another wild scramble and it was on the ridge rope itself, tottering uncertainly back and forth. Then, to my amazement, the mouse launched itself out into space and slid down the smooth and shining surface of the tent to the ground below. The action was repeated many times until the little animal became expert and reckless and lost no time between the climb back and the sheer abandon of its slide. Faster and faster it ran, intoxicated now by its new and thrilling experience; up along the edge straight down toward the center of the ridge rope, a swift leap, belly down, legs spread wide to get the full effect of the exhilarating toboggan it had found…

The mouse, Olson concluded, had come under the spell of moon magic. “If nothing else,” he wrote, “moonlight made animals and men forget for a little while the seriousness of living; that there were moments when life could be good and play the natural outlet for energy. I knew that if a man could abandon himself as my deer mouse had done and slide down the face of the earth in the moonlight once a month — or once a year, perhaps — it would be good for his soul.”

Slide down the face of the earth in the moonlight. I’ve never forgotten that phrase or the story of the mouse on the tent line, and even though Olson’s words didn’t seem to include me, his spirit did. I’ve seen similar joyful play over the years, participated in some full-moon fun myself. Who knows what moon magic we’ll find under this year’s strawberry moon?