Summer outdoor fun in and around D.C. 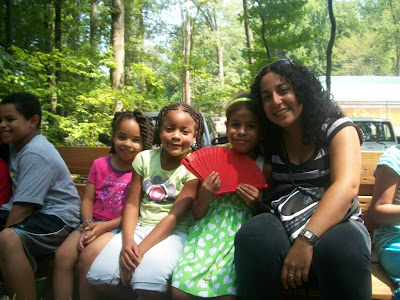 Beth Homicz, co-author of AMC’s Best Day Hikes near Washington, D.C., recently shared several of her favorite family-friendly hikes in and around the nation’s capital. For that list, she focused on outings that combine history and nature. One of her favorite hikes in the greater D.C. area, though, is less about history and more about simple family fun.

Homicz calls Watkins Regional Park, in Upper Marlboro, Maryland, “a great place to spend an afternoon, especially in the summer.” The park is full of child-friendly delights: a small-gauge train that offers rides all summer; the historic Chesapeake Carousel, first built in the early twentieth century and lovingly restored; an educational farm with animals children can feed; pony rides and hayrides.

Ten short trails radiate out from the park’s nature center, guiding children to beaver and frog ponds, past wildflower meadows and butterfly/hummingbird gardens, and through woodland forests. Families can borrow baby backpacks and kid activity packs from the nature center, or participate in a variety of free activities such as Friday night bat hunts and Saturday hikes led by naturalists.

The park website covers some of the basics, but Homicz encourages families to get out and see the park for themselves. “It’s much more enticing in reality than it is online,” she says — a delightful example of underpromising and overdelivering.

In addition to Watkins Regional Park, Homicz points out several other family-friendly summer events in the D.C. area:
– The National Gallery of Art hosts a “Jazz in the Garden” series on Friday evenings in the museum’s Sculpture Garden through the summer.
– Brass bands from the United States armed services perform on the west steps of the United States Capitol Building on Monday, Tuesday, Wednesday and Friday evenings June through August and in other locations around the city.
– The Smithsonian Folklife Festival takes place on the Mall during the two weeks surrounding Independence Day.
– On Monday nights from the end of July through August, free classic movies are shown in the “Screen on the Green” movie festival on the National Mall.
– The National Park Service commemorates the 150th anniversary of the First Battle of Manassas with a variety of special programs and activities at Manassas National Battlefield Park, July 21 through July 24.