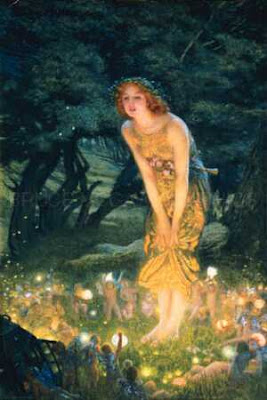 The school year ended last Friday for our children. According to Virgil, summer vacation therefore officially began yesterday. (With the patience that children reserve for their dim-witted elders, he explained that the weekend didn’t count; he’ll start rolling his eyes as he explains such things in about three more years, if he follows his sister’s schedule.) That celebration delayed my realization that yesterday was also the Summer Solstice, the longest day of the year and the official, astronomical start to summer in the Northern Hemisphere.

In some parts of the world, this solstice is celebrated as Midsummer’s Eve, the middle of summer, not its start. Such celebrations often focus on the lateness of nightfall — or above the Arctic Circle, by its absence altogether. We’re not far enough north here to be in the land of the midnight sun. But our 16-hour day pulled us toward lateness, too, making us want to stay with the longest day until night had truly fallen.

Friends had dropped off their two sons with us for the evening, and Virgil had a friend staying for a sleep-over. Ursula and the four boys played capture the flag into dusk. Hearing their shrieks, calls, and laughter through the open windows, I was transported back to summer nights in my childhood, the endless games of kick the can and tag, the way the neighborhood rang with the sound of our games. I lingered at the window, listening, feeling the doubleness of the moment, my childhood and my children’s overlapping on a summer’s evening.

The boys’ parents arrived a little after nine o’clock to take them home. The hour would have been horribly late for a school night — but it was midsummer’s eve, after all. Ursula and the boys disappeared into the gathering darkness while the adults chatted by the car. Bullfrogs, fat green pashas of the pond, lay down a rumbling bass line behind our conversation.

The kids re-appeared out of the falling dark, Ursula leading the way. She carried one arm stiffly out in front of her, a bit of yellow-green light glowing on her forearm. The firefly perched there a second or two longer, shining its light on the longest day of the year, and then flew up, blinking, into the night sky.

Learn more
– Listen to a short audio description of the summer solstice on The Night Sky.
– Read “Summer Solstice 2010: Why It’s the First Day of Summer” on the National Geographic website.