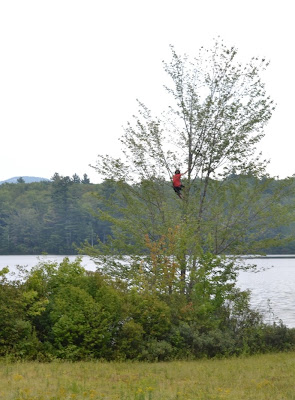 “One could do worse than be a swinger of birches.” The last line in Robert Frost’s poem, “Birches,” came to me yesterday as I watched Ursula climb the trees down by the pond — two trees, actually, side by side at the water’s edge and not more than two feet apart at the base. They’re maple, not birch, I believe, but young and supple like birch, with upward-pointing branches spaced just far enough apart for a growing girl to climb.

Ursula has pulled herself into their lower branches for several years now. But yesterday while I watched from the house, she ascended well above her usual perch, threading back and forth between the two trunks. I’d look out and see her walking up the right tree almost in a layback, a climber’s move. A while later, I noticed her stretched to her full length in the left tree, reaching up for another branch. All afternoon, she climbed up and down and between those two trees. At one point, I saw her striding across the field between the pond and the house with slings and a pulley in one hand. Soon she had them arranged in the trees, as well.

Ursula and I are spending the last week of true summer here at the pond while Jim and Virgil are away. (Any child will tell you that in spite of what the calendar says, summer ends when school starts.) I’d asked her yesterday morning if she wanted to invite a friend over for the day or even overnight. “I don’t know, maybe, I can’t decide,” she’d cried. And then I saw her in the trees.

Eventually she climbed so high that my mother’s heart rose, too, and constricted. She reached the smallest branches, close enough to the tips of the trees that they were no longer obscured by the fullness further down, and thin enough to make good switches. The trunks tapered to similar slenderness and seemed to sway downward under Ursula’s weight, slight as she is. I watched her for a long while, needing to be sure she was safe. And then I simply watched for the pleasure of watching her bend those trees, and bend herself to them.

When she finally came in, it was nearly dinner time. The light slanted onto the pond through Ursula’s trees, silvering the undersides of their leaves as they lifted in the breeze. She, too, was radiant.

In “Birches,” the poet comes upon birch trees that have been bent to the ground by ice. He imagines instead that a boy has bent them —

As he went out and in to fetch the cows —

Some boy too far from town to learn baseball,

Whose only play was what he found himself,

Summer or winter, and could play alone.

Such a boy, or girl, would learn “all there was to learn about not launching out too soon” about climbing carefully, “with the same pains you use to fill a cup up to the brim, and even above the brim.” The poet lets the imagined boy follow his desire, flinging himself outward on one of those slender saplings, “feet first, with a swish, kicking his way down through the air to the ground.”

Toward heaven, till the tree could bear no more,

But dipped its top and set me down again.

That would be good both going and coming back.

She knows, too, that on some days at the end of summer, one can do no better than be a swinger of birches.