Wearable technology is all the buzz in the tech world at the moment. Wrist devices like the Nike Fuel Band are currently making the deepest run into the mass market, but there’s a nascent and potentially much greater development underway: smart fabrics.

Simply put, smart fabrics contain tiny flexible sensors and conductive yarns that can measure and transmit information about the wearer, including heart rate and breathing rate. They aren’t an all-in-one technology—they still require an attached battery-powered data unit and an app-enabled smart phone to communicate with—but they are on the way there. And don’t worry, your stinky and sweat-soaked smart shirts are machine washable.

While the futuristic potential of this technology is fascinating, for the moment let’s consider just the heart rate capabilities of two currently available smart T-shirts, which allow you to ditch the separate (and moderately cumbersome) chest strap of traditional heart rate monitors.

OMsignal
Manufacturer of “the first ever collection of biometric smartwear,” OMsignal offers a small collection of long-sleeved, short-sleeved, and sleeveless shirts that measure and transmit heart rate to a slim, low-profile data module that attaches to the side of your torso. The rechargeable data module connects to your smart phone to display real-time information. If you’re not carrying your phone during activity, it also records data continuously for later viewing. The module holds a charge for up to three days of continuous use.

The small Montreal-based start-up (and the technology that powers it) has garnered considerable news coverage of late, including the New York Times, Wired, and the Economist. You can currently pre-order a shirt and data module package for $199, or purchase the shirts and module separately.

GOW Smart T-Shirt
GOW represents more of an evolutionary rather than revolutionary transition from today’s heart rate monitor systems. It integrates a pair of woven cardiac sensors with a wireless clip-on heart rate monitor unit, or “Fitmitter,” that (just like a traditional heart rate system), sits smack in the middle of your chest. As with OMsignal, the monitor communicates with a compatible, app-enabled smart phone.

Unlike the OMsignal option, which is currently only available in a men’s version, the GOW offers a women’s sports bra option. A package of a shirt or sports bra plus transmitter costs $150. Extra shirts or sports bras can be purchased separately.

Other similar designs and technology are being produced by companies such as Sensoria, NuMetrex, and Cityzen Sciences. 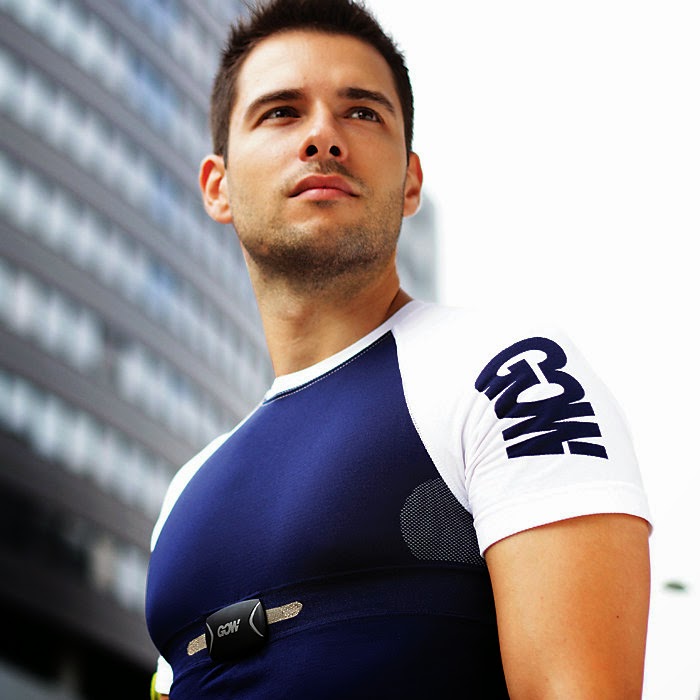