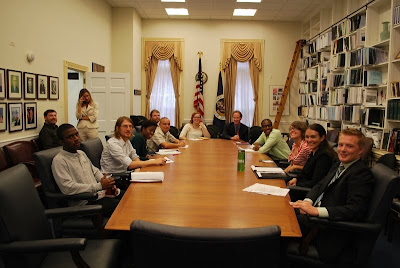 A few months ago, Emilie Colby attended an Outdoor Nation Youth Summit in Minneapolis. Outdoor Nation is a youth outreach effort started a year ago by the Outdoor Foundation, a nonprofit established by the Outdoor Industry Association. The 20-year-old college student had heard that the organization was looking for ideas to fund, and she had one.

It had started as a joke. “Wouldn’t it be funny if we took Congress camping?” Colby had asked other young activists who wanted to show lawmakers the importance of reconnecting America’s kids with the outdoors. “Emails can be deleted and dismissed,” she said. “With petitions you just tack your name on to a form letter.” But if you could talk to, say, Nancy Pelosi around a campfire….

That joke became the “Take Congress Camping” kit — a sealed plastic bag stuffed with postcards, crayons, and suggestions for personalizing comments to legislators — and one of 20 pilot projects given $2,500 in seed money by the Outdoor Foundation.

The pilot projects fall into three categories — mentoring, access, and engagement — outlined in the America’s Great Outdoors report published earlier this year. Several mentoring projects connect collegiate outdoor recreation programs with nearby K-12 schools. One access project works with outdoor specialty retailers to bring outdoor gear to under-served communities. Some of the engagement projects will focus on one neighborhood, while others, like Colby’s “Take Congress Camping” project, will target youth around the country.

Colby’s joke has translated into reality. This fall, she returned to New England, where she first learned to hike, ski, and paddle. She’s staying in touch with her far-flung project team as they refine their pilot season. Colby won’t be roasting marshmallows over a campfire with legislators, at least not yet, but those lawmakers will be hearing from her — and, she hopes, thousands of other young people — over the coming year.