Tapping Into the Season 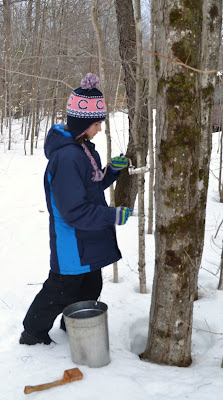 The season here has shifted. Even before Daylight Savings Time kicked in on Sunday, there were signs everywhere: the rotting snow that’s still deep in the woods has melted out to bare ground in patches on south-facing hillsides; the ice has let loose in rivers and streams; the roads are a muddy mess. And over the weekend, the kids happily put on jackets and mittens to go outside — not to play in the snow, but to help tap a few sugar maples we have around the house and hang sap buckets on them.

By rights, we should have done this weeks ago. The first run of sap rises up from tree roots on the warm days following nights that still dip below freezing. Maple sugaring is a northern business (or fun activity, as in our case), turning the system that sugar maples have developed to weather cold winters to our benefit. Trees store starch in their roots and stems during the winter months. This starch becomes converted to sugar. Nature’s own pressure system, created by thawing during the day and freezing at night, alternately pushes the sap up from the roots and out to the branches and pulls it back down into the roots. We tap into that system when we tap a sugar maple. As soon as temperatures stay above freezing at night, the pressure no longer builds, and the season is over. Some years maple sugaring can last six weeks; in other years, it may last only days.

Maple sugaring is reliably a mud season activity, though early runs in mid- or even early February aren’t unheard of around here. We’re not actually in it for the maple syrup, though, nice as it would be to boil down our own. We like tapping trees for the sap itself — sweet water, we call it. We drink it cold or hot, and make our tea from it. We send it in to school with the kids’ lunches. We share it with neighbors, whose tradition is to celebrate the season by boiling hot dogs in it. And anyway, we can find maple syrup, locally produced, in the grocery store. Sap is the rarer treat. 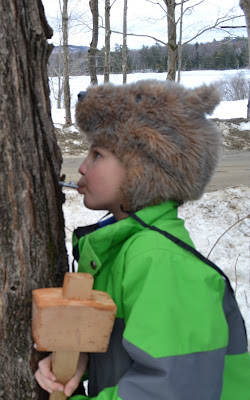 Ursula and Virgil took turns boring holes into the trunks using a hand-drill. Jim showed them how to angle the drill and how to clean out the slanted hole with a twig. They drove in the taps using a wooden mallet, hung sap buckets directly on the taps, and covered them with tin V-shaped “roofs.”

The exciting part was waiting a few seconds and seeing the clear sap emerge in the groove in the taps, then drip from the ends into the buckets. Even after doing this for years, it still seemed miraculous. Ursula and Virgil, both, put their mouths to the taps to drink the sap straight.

This in-between season can be a tough time of year to get kids outside. For the next few weeks, though — if we’re lucky enough — we have five sugar maple trees giving our kids a reason to run outside before school starts, or to punch thigh-deep through soft snow when they get home in the afternoon to “see what’s in the buckets.” Reason enough to tap.