‘Thank You For Your Service’: A Veterans Day Encounter at Lonesome Lake Hut 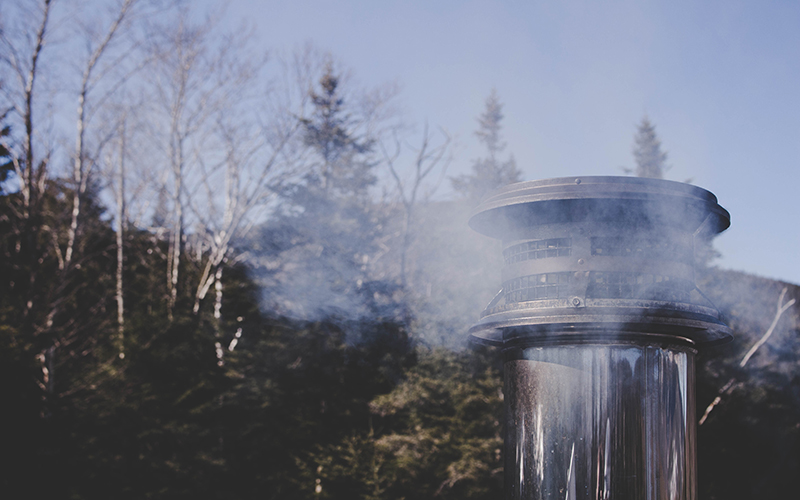 All three nights he stayed as my guest at Lonesome Lake hut, Adam set his dinner in motion by spreading a small, red-checkered tablecloth on the wooden table. More akin to a plastic place setting, the tablecloth popped against the blonde wood, adding a touch of class to the hut’s rustic character. In the kitchen, Adam—who was in his late 60s or early 70s, if I had to guess—filled the kettle and softly blew on the gas burner to entice the flames. He mixed the boiling water with a dehydrated meal he’d brought and let it sit for five minutes. While most hikers eat this meal out of the bag to minimize dishes, he spooned it into a bowl. Gradually, the tablecloth filled: a napkin, the steaming bowl, a metal spoon, and a plastic cup of water. When he finally sat to eat, it was a refined experience, embellishing a simple meal and infusing it with intention. Upon finishing, he folded the cloth neatly and replaced it in his bin of food, then he washed his dishes, and mine.

Lonesome Lake hut in November is a world in transition. The last bright leaves have fallen to the ground and are being steadily coated in white. Days can still be mild, but the nights on Cannon Mountain will turn snowy footprints to slick ice. The lake is just starting to freeze, framed by the frosted outline of the Franconia Ridge. The six-person Croo that cooked hot meals for guests all summer and fall hiked out in late October, and I hiked in, one member of a caretaking pair working one week-on, one week-off. During the day I chop wood, clean the hut, and collect water in jugs from the one faucet connected to the well in the basement. Guests bring their own food, and each evening after lighting a fire in the woodstove, I explain the quirks of the kitchen to them and sign them up for a time to cook. This was my fifth season in the huts but my first caretaking, and aside from Saturday nights, it was a much quieter experience. I was 21, a young woman seemingly alone in the woods. But despite its name, Lonesome Lake is the busiest of the three self-service huts and I rarely felt alone. 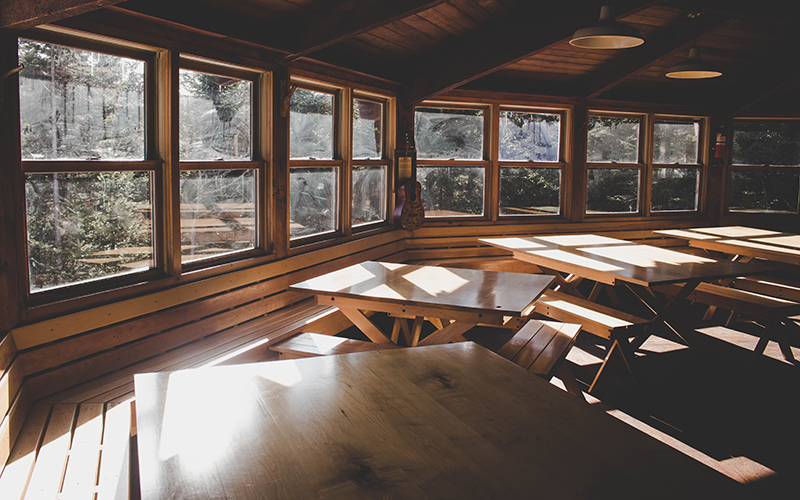 During those three days I welcomed a couple other guests, but Adam was a constant, our companionship growing. I learned he comes here every year around Veterans Day weekend to pause and reflect in a calm place. A quiet older man, he spoke with the perspective of someone who’s paid his dues. His graying hair was mussed and swirled from hours spent under a winter hat and his pale skin seemed wrapped around muscle and bone, a weathered landscape. Despite his age, Adam had retained a youthful hardiness, his movements fluid and purposeful. Adam fully inhabited the space he was in, engaging with it. He didn’t draw attention to himself, but in conversation with him, it was clear he was fully present.

His first night in the hut he brought his friend Chris, a fellow guide for Military Outdoors, which is a program of the Sierra Club that connects veterans and their families to the outdoors and inspires them to become advocates for the environment. We all talked about gear and search and rescues, as Chris was a member of the Pemigewasset Valley Search and Rescue Team. When they left for a day hike the next morning, the wind was lapping up the fine snow on the ground and spraying it into the air like a thirsty dog. Adam and Chris looked at each other through tinted goggles, each a ballooned caricature of themselves under layers of clothing. Chris was going to hike out afterward but Adam intended to return by 7 p.m. As the light faded at 4:30 p.m., I began to worry way ahead of schedule. I’d seen Chris head down to the parking lot but his older companion had yet to return. Adam had a spot tracker and enough gear to spend the night outside, but I still caught myself glancing toward the door, unable to concentrate on my book. At 6 p.m., feet stomped up the stairs and Adam shuffled inside. He greeted the three chilled women bundled around their Scrabble game, made his dehydrated meal, and rolled out his yoga mat by the wood stove. The crease in my forehead released.

On Wednesday morning I was perched on the counter eating my yogurt when Adam ambled into the kitchen. “I hate to make you move, EB, but I need my caffeine!” I chuckled and shifted aside, clearing passage to the bin beneath the counter. On the rim of his coffee mug he clipped a mesh bag into which he poured coffee grounds and then boiling water from the kettle. After breakfast, Adam offered to shovel the boardwalks while I chopped wood. Ice crystals formed on the scarf pulled over his chin as he labored to shift the snow in the November air. Back bent, he claimed he wouldn’t feel right if he didn’t help, and that this was something he could do. Afterwards, he asked for a broom to sweep away the powdery remains on the wood. 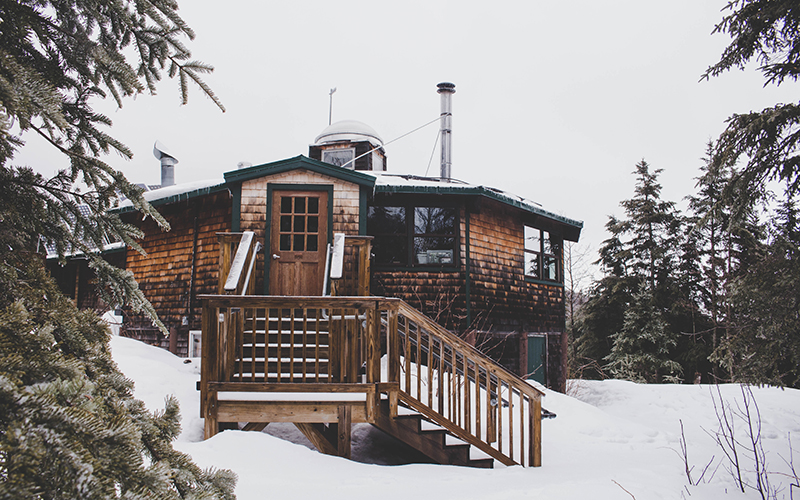 When he returned, two new guests had arrived, college-age boys fresh from basic training, loud and showy, preening and sharing stories about each other.

One of them asked Adam, “Do you have any military experience, sir?”

“Thank you for your service, sir.”

Then like an echo, the other repeated, “Thank you for your service, sir.” 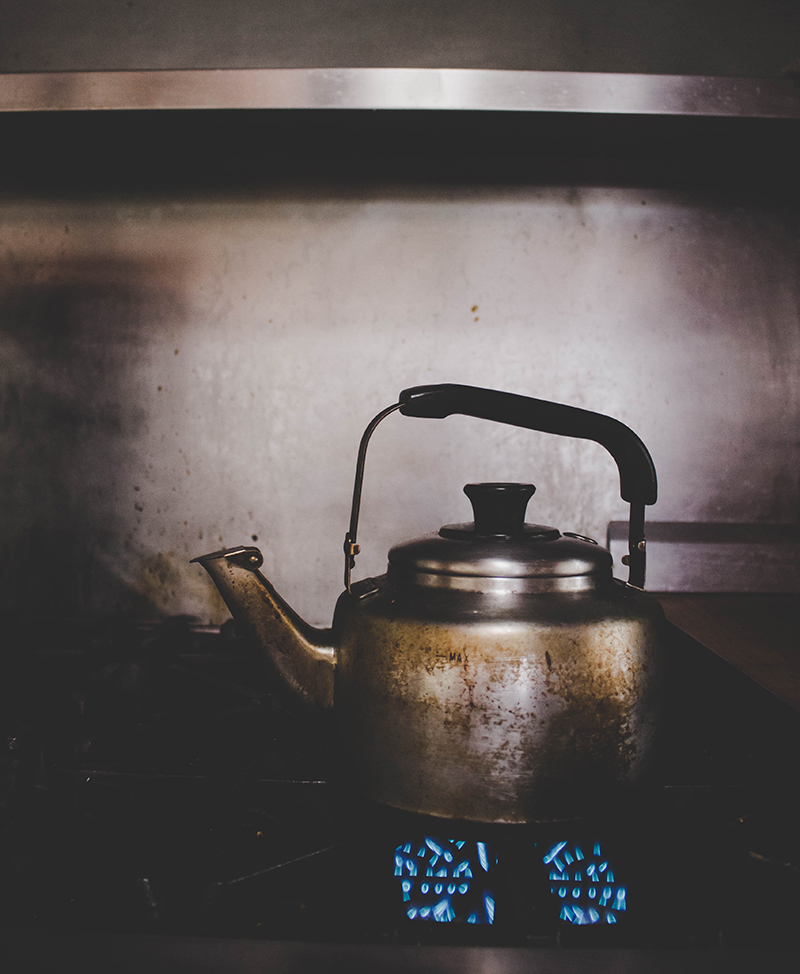 Emily DavenportA kettle heats up on the stove at Lonesome Lake hut.

After the boys went to bed, Adam sat in the rocking chair in front of the wood stove reading while I refilled the water jugs from the faucet. I glanced at him, questions forming in my mind.

“Adam, how old were you when you went to war?” I asked.

I nodded slightly, staring at the water pouring into the blue jug angled to fit into the sink.

After a pause I asked, “Were you drafted or did you choose to go?”

He turned again, his expression unreadable as to whether I was disturbing him or allowing him to share a piece of his past. “I had two choices,” he finally answered. “College or war. A part of me always wanted to be a paratrooper ever since I was a little boy, so that’s what I did.”

I pondered my next question carefully. “Were you scared?”

He smiled to himself. “I was excited, but while I was there I realized I was against the war. I didn’t leave immediately, though, because I thought I could stop more bad things from happening if I stayed. People had begun to respect me there. When I did return home, I joined Veterans Against the War. I got more support from the anti-war movement than the establishment. It was 1990 when someone first told me thank you for your service.” He looked at me closer. “Thank you for asking.”

When I looked back at the jug I was filling, the water was lapping the rim. I smiled, feeling glad there were people like Adam who calmly observed the world, selflessly reaching out where they could to make it a better place.