The Alpine Hammock: Bivy Sack and Hammock in One Lightweight Package

The Alpine Hammock can be used as either a traditional hammock or as a waterproof bivy sack. The brainchild of Mike Brown and Ryan Stolp, two recent engineering graduates from Tufts University, the bug-proof, waterproof Alpine Hammock offers a potentially ideal go-anywhere shelter solution for the Northeast backcountry. 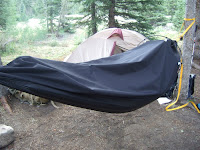 The design features a layer of waterproof nylon on the bottom. On top are two layers: an inner layer of no-see-um netting and a top layer of waterproof-breathable fabric. Both layers zip up to fully enclose the hammock and can be used independently (or not at all), depending on the bug and weather conditions. A small hoop pole extends above the head, providing a modicum of head room. Early production models weigh in at just under 23 ounces.

The Alpine Hammock can be strung between two trees using the reinforced loops at either end of the hammock. (As I discuss in my recent article “Got Trees? Welcome to Your Next Campsite,” trees are just about everywhere in the Northeast backcountry, making hammock camping an excellent sleeping option that radically expands the number of potential overnight sites.) 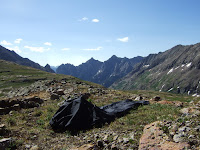 But unlike traditional backpacking hammocks, the Alpine Hammock also works as an on-the-ground shelter when you’re in places that lack trees, such as during above-treeline travel.

But here’s the kicker, er, Kickstarter. At the moment, the Alpine Hammock is only a prototype. To bring it into production, Brown and Stolp are using the crowd-funding site Kickstarter to raise money to get the project off the ground and into production.

They are seeking to raise $40,000 and have until August 30 to do so. As of August 17, they were just over halfway there. Anybody can contribute to their effort. If they fail to reach their funding goal, you get your money back. Here’s their video pitch: 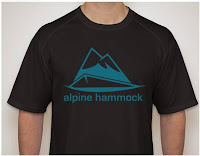 You can donate as little as $1 or give at higher levels, which come with various amounts of Alpine Hammock gear, including an Alpine Hammock logo T-shirt ($45 or more) or one of the first Alpine Hammocks to come off the production line ($300 or more).

This is the third item of innovative outdoor gear I’ve profiled from Kickstarter, which seems to be developing into a bit of a hotbed for new outdoor gear entrepreneurs, whether they’re developing a radical re-think of bike lock design or creating a disposable paper pot.

The Alpine Hammock is also another great example of the wide range of outdoor equipment being developed and manufactured by folks in the Northeast. Below are 20 Northeast-based gear companies I’ve profiled over the past few years.

Support your Northeast gear companies! Here are the 20 I’ve profiled to date: