I’m a map junkie. Over the years, I’ve collected quite a few maps of the New England backcountry. But there’s only one series of maps that decorate my walls: Raven Maps.

Raven Maps produce the finest wall maps. Period. They are works of art as much as they are trip planning resources. The terrain leaps off the map as if were printed in three dimensions, allowing you to immediately visualize the topography of the state—and identify intriguing and interesting areas to explore that you may never have otherwise noticed.

Raven Maps produces a state series of maps, most of which feature only one state per sheet. Due to the small size of many Northeast states, however, several are combined on a single map.

In New England, Maine is a separate map, New Hampshire and Vermont appear together on the same map, and the three southern New England states (Massachusetts, Rhode Island, and Connecticut) appear on another. In the Mid-Atlantic, New York earns its own map, Pennsylvania and New Jersey are combined on another, and Delaware, Maryland, and Virginia all hang out together on the last map to complete the AMC region.

Another great feature of the entire New England and Northeast series is that they are all produced at the same scale (1:500,000), which provides some great perspective on their relative sizes when placed near each other. (Did you know that Maine is as large as the five other New England states combined?)

The maps are large, ranging from 26″ x 37″ (N.H./Vt.) to 43″ x 59″ (N.Y.—almost 5 feet wide!), which makes them all the more attractive for exploring the intricate geography of the states from your office chair or living room couch. They also make for great presentations—I utilize the New England series for all my presentations about AMC’s Best Backpacking in New England. 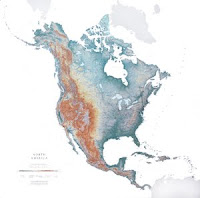 Outside of the Northeast, Raven Maps also produces a really awesome map of North America, which is distinctive for showing the entire continent—from Central America to Labrador to Alaska—as one comprehensive whole. (Alaska is a lot farther from the lower 48 than you might realize from the standard miniaturized inset where it usually appears!) Raven Maps also produces the Benchmark Series of State Atlases for most of the western states. I dream of the day when these are produced for the Northeast—they are vastly superior to the DeLorme Atlas and Gazeteer series. In the meantime, if you ever vacation in the Rockies or points west, buy one.