Part 2 of 2 on the best and latest online state park features. Today we look at the six New England state park systems. (You can read Part 1: New York and the Mid-Atlantic here.)

The only state park system that offers its own iPhone app: The Official Rhode Island State Park Guide—Great Outdoors Featuring Pocket Ranger (also available as an Android app). Features all Rhode Island state parks, including extensive details about each of them, from park history to directions to maps to fees and facility rentals.

Connecticut State Parks
The Connecticut Department of Environmental Protection (DEP)—managing agency for CT’s state parks—offers an extensive array of wildlife publications, including fact sheets about the state’s animal denizens and an entire decade’s worth of archives of its bi-monthly publication, Connecticut Wildlife Magazine.

Massachusetts State Parks
Nothing too innovative here, though Massachusetts does offer one of the better locator maps for its many parklands, as well as an A-Z archive of its excellent state park maps. 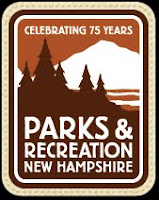 New Hampshire State Parks
Browse through the state’s extensive and varied collection of parklands with an excellent online version of its 2010/2011 State Parks Guide, a 42-page publication that details all of the parks and their recreational opportunities, including many enticing photographs.

Vermont State Parks
Hone your park browsing with a “Top 5” round-up of the best parks for various activities, including biking, views, and remote camping.

You can Find Parks & Lands using a range of search criteria, including “Single-tank trips”—identify parks within a certain distance from any town in Maine. Note that the most iconic of Maine state parks, Baxter, has its own site—http://www.baxterstateparkauthority.com/—and that reservations for the 2011 summer season open on January 18.