The Coast at Last 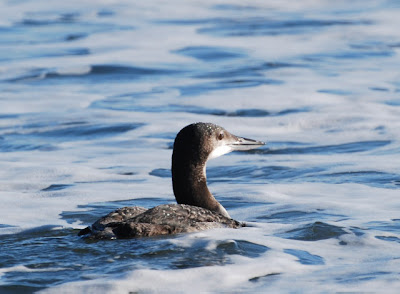 The juvenile loon that we rescued from our pond last week spent four days with a wildlife rehabilitator. His home during that time was a six-foot-by-six-foot pool filled with water. The wildlife rehabilitator pumped air into previously frozen capelin to make them float — and therefore more palatable to a bird that expects to chase its food — and crouched out of site of the loon to toss them into his pool. She kept an eye on the frostbite, small red spots on his webbed feet, and treated the loon for tapeworm, thereby adding to the list of possible reasons it might not have been able to make it off our pond.

By the end of the week, the loon had clearly recovered his energy, attacking his pool, the hose, and even his caretaker. It was time to get him to the ocean.

Early Friday morning, she put him in a crate and drove him to a protected cove along the coast. A member of the Loon Preservation Committee had a home nearby, and offered to keep an eye on the young bird — easy enough to do, since he now sported a silver U.S. Fish & Wildlife Service band on one leg. She met the rehabilitator there and captured these photos of his release. 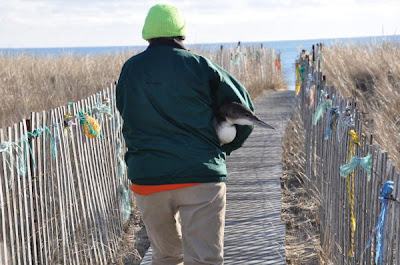 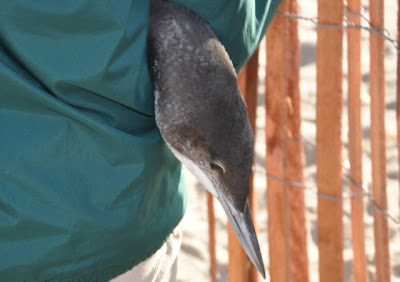 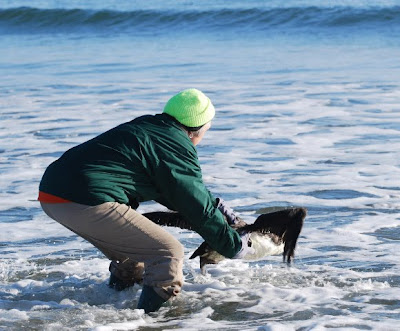 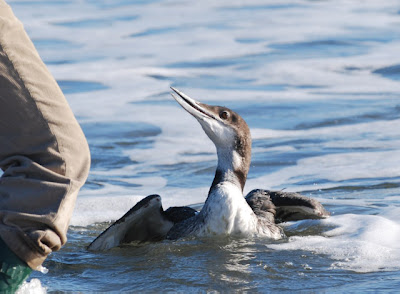 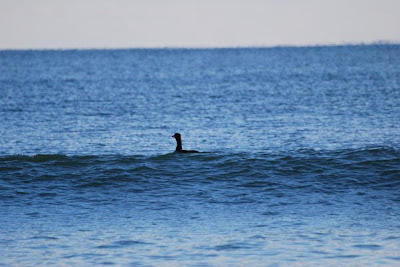 After the rehabilitator gently put him down in the water, the loon lingered for a brief moment and seemed to look back at her. Then he rode the swells out into the bay, stretched his wings, and dove. For the first time since his parents left our pond more than two months ago, he is once again in the company of other loons.

All photos by Kittie Wilson. You can see more of her loon photos in Loon Preservation Committee newsletters. All rights reserved.