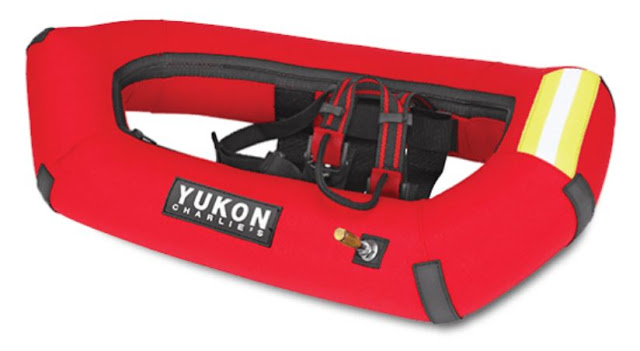 Tackling the high mountains of the Northeast in winter is serious business. Deep snow, steep terrain, icy conditions… you need to prepare for it all. Given that a good pair of snowshoes is usually an integral part of such adventures, I wanted to highlight several new designs that have caught my attention this season.
First, though, a quick primer on what makes a snowshoe better suited for more serious backcountry use. It basically comes down to two crucial things. The underside of a backcountry snowshoe features more metal teeth, facing more directions, to provide maximum traction over the full spectrum of ice, snow, and terrain conditions. The teeth under the front of your foot also tend to be pointier and longer for better grip on ascents.

Second, the binding system usually provides a much tighter, more secure fit so that your footwear stays securely in place over rugged terrain. They also tend to accommodate a larger sized boot, such as those for snowboarding or mountaineering.

One other feature that I rank highly for backcountry snowshoes are their “packability,” or how easy it is to lash them to the outside of your pack when not in use. Models with binding systems that lay flat are much easier to nest together for more compact packing—a major plus for trips where snowshoes may only be intermittently needed.

Lastly, many backcountry models also feature a heel bar that can be raised for sustained ascents. This reduces the distance your heel drops with each step and helps prevent calf muscle burn, fatigue, and next-day soreness.

Atlas Endeavor and Aspect
These two models are new to the venerable Atlas line of snowshoes. The Aspect follows a more traditional backcountry design and price point ($289.95), while the Endeavor represents a more innovative—and affordable—option ($219.95). What makes the Endeavor so different is its hybrid pairing of an aluminum tubing frame in the front and a solid PVC (plastic) decking in the back.

Both styles feature extensive traction underfoot, including full-length side rails. They both also feature the Atlas PackFlat binding system, which makes them much easier to lash to your pack.

MSR Revo Series
I’ve long been a fan of MSR’s plastic decking designs. (I still own, and regularly use, a 20-year-old pair of Denali Classics, which evolved a number of years ago into the EVO line of snowshoes.) Now MSR has taken this approach to an even toothier level with its Revo Ascent Snowshoes ($239.95), which adds full-length side rails that extend around the curve of the snowshoe front, or foredeck, plus two serious metal fangs under the toes. You can also add flotation with a pair of optional Revo Tails ($49.95).

Yukon Charlie’s AIRLIFT Emergency Inflatable Snowshoes
Now for something completely different. I’m not quite sure what to make of this radically new take on snowshoe design: a pair of inflatable snowshoes that vaguely resemble puffy red river rafts on your feet ($179.99).

On one hand, I’m intrigued by the fact that they pack down more compactly than any other snowshoe, which makes them much easier to carry for the just-in-case-you-need-snowshoes scenario. On the other hand, I wonder how durable these would be over time, especially if you’re dealing with occasional sharp rocks or branches underfoot (as is often the case in the Northeast). Plus, they appear to have minimal traction underfoot and might be challenging to use in steep terrain.

Whatever you think, it’s always neat to see companies trying out new approaches and designs. And, hey, they are currently sold out online. Perhaps Yukon Charlie’s is on to something here…
Happy (almost) winter!