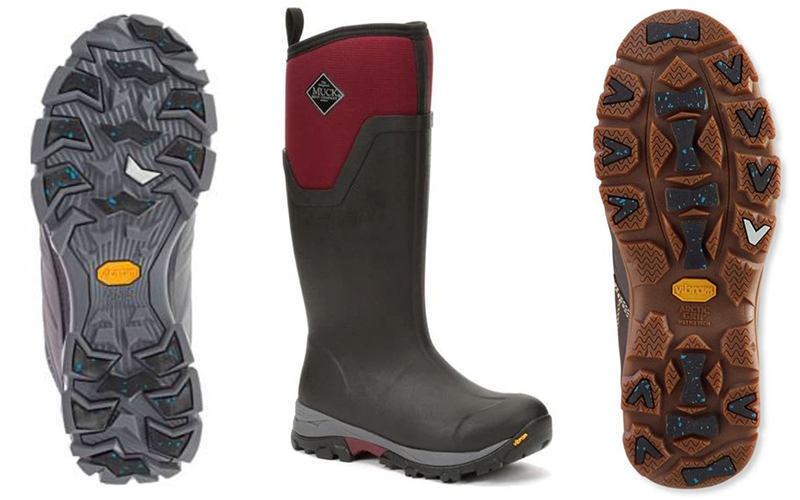 Introduced in 2016, Vibram’s Arctic Grip technology is designed to provide extra traction and grip on slick, wet ice, making it a top contender for winter footwear this year. Integrated into the rubber sole underfoot, it does indeed work, as I detailed two winters ago in my product review of the Merrell Overlook 6 Ice+ Winter Boot. Significantly, though, my personal experience also illustrated the crucial importance of where the Vibram Arctic Grip is placed in the sole. In the case of the Overlook 6 boots, the Arctic Grip placement did not match where I applied pressure underfoot as I walk, which largely negated the benefits of its extra traction.

Now that Vibram’s exclusive one-year deal with Wolverine Worldwide (which includes Saucony, CAT, and Merrell, among other brands) is now over, I wanted to take a quick survey of the current offerings, with a particular eye toward where different brands are placing the Arctic Grip in the sole. Given most people’s tendencies (inlcuding mine) to pronate, or roll from the outer heel to the inner forefoot, I particularly looked for Arctic Grip placement in those areas.

Here are some of the options that jumped out at me:

Several styles of these classic pull-on snow, mud, and (of course) muck stompers have been upgraded with Arctic Grip, including their iconic Tall Muck Boots ($195, in men’s and women’s). The amount and placement of the Arctic Grip, however, does leave something to be desired, especially in in the forefoot (though the fact that they are available up to a men’s size 15 is a big selling point for the giant-footed among us, including me).

For a more secure fit than that offered by pull-on boots, you can also check out the Outpost Lace boots ($205, men’s only), though again the placement of the Arctic Grip in the forefoot is more center-line than perimeter.

Merrell offers perhaps the widest selection of footwear with Arctic Grip, with more than a dozen styles currently listed on their website. The Thermo Freeze Mid Waterproof ($160, men’s and women’s) is particularly attractive given the extensive use of Arctic Grip under the heel and around the perimeter of the sole. Most of their other styles, however, still tend to place Arctic Grip closer to the midline.