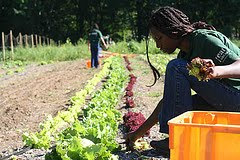 You could say that FoodCorps grew from its grassroots. The seeds of the national service program were sown through many initiatives that have been trying to reframe the relationships that children, families, schools, and communities have with food. Some of those initiatives are already national in scope, such as the National Farm to School Network, which includes the Boston Public Schools. Others work on the state level, while many more focus on specific communities.

The new national service program decided to partner with existing nonprofits in order to leverage their experience. FoodCorps selected partners in 10 states for its inaugural year. In Massachusetts, they chose three organizations — Boston Public Schools, Food Project, and City Sprouts — collaborating as the Massachusetts FoodCorps Initiative.

Each of the three partners brings important experience to the kids-and-food table. Through its Farm to School Initiative, which began in 2008, the Food and Nutrition Services of the Boston Public Schools have incorporated local produce into school lunches. The Food Project engages teens and volunteers in planting and tending gardens around the greater Boston area. In 2010, its twentieth year, the Food Project grew more than a quarter-million pounds of food on more than 40 acres, selling some through community-supported agriculture (CSA) shares and donating thousands of pounds to local shelters. City Sprouts has worked in the Cambridge schools for 10 years to integrate school gardens into the elementary and middle school curriculum.

Six FoodCorps service members were assigned to the Massachusetts initiative: three to the Food Project, two to City Sprouts, and one to the Boston Public Schools. The hope among the partners was that the FoodCorps collaboration would allow each organization to expand its existing work, and also to move onto new ground. If they could bring all their work together — the experience of the Food Project in building and tending community gardens, the experience of City Sprouts in creating school gardens and garden-based lesson plans, and the experience of BPS in bringing fresh and local food to schoolchildren — maybe the changes they’ve sought will happen faster.

“I’d love to look down the road in 3 to 5 years,” says Jay Harrison of the Food Project, “and see kids having healthy snacks and nutritious lunches using food they’ve grown themselves. I’d like to see science, literature, history, math being taught using school gardens; to see kids, their parents, their teachers, and others in their community working together in gardens right where they live.”

This is the second in a series on the FoodCorps national service program in Massachusetts. Next: FoodCorps on the ground in Gloucester.