The Most Useful Feature of a Stand-up Bike Pump? A Pressure Gauge

These days I commute by bicycle on a near daily basis. It’s a 28-mile round-trip, which I time on most rides to keep track of my commute hours. So I was a bit flummoxed last week when my average ride time ticked up by roughly five percent on several straight days—and that my regular gear combinations seemed to require more effort than usual.

Clearly there was more friction somewhere in my cycling system. At first I thought my chain or gears might be gunked up, since I had recently ridden through some wet and mucky commutes. Then I decided that I must just be fatigued from my umpteenth straight night of shoddy sleep courtesy of my 8-month-old and his regular 2 a.m. diaper changing parties.

Finally I tested something that should have been a much more obvious first check: tire pressure. And sure enough, a simple push-down check by hand showed it was low. As a result, the tires were noticeably flattening out under my weight, increasing the amount of rubber in contact with the road—and significantly increasingly my rolling resistance as well. 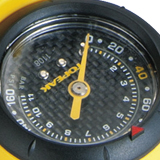 Here’s where my new favorite bike accessory came in: a floor pump with a built-in pressure dial. If you only use a small handheld bike pump (the kind you mount onto your bike frame), or if you have a standard floor pump without a pressure gauge, it’s impossible to know exactly what the inflation pressure is without using a separate pressure-testing gadget.

What’s more, in my experience it can be extremely difficult to inflate bike tubes (especially those in road tires) to their recommended pressure with only a small handheld pump. It gets very difficult to pump at higher pressure, which means many riders stop inflating well short of the recommended level.

After connecting my bike tires to my current floor pump—the basic Topeak Joe Blow Sport Pump ($35 to $50, depending where you buy)—I discovered the pressure had dropped from a recommended 75 psi to a paltry 25 psi or so. A few pumps later, my tires were back to their recommended pressure—and my commutes returned to their normal speed and effort.

I was surprised by what a tangible effect low tire pressure had on my riding experience, at least in terms of the effort factor. Keep in mind, however, that there are downsides to keeping your tires at maximum pressure, especially if you’re riding rough roads or other bumpy terrain. Higher pressures may reduce rolling resistance, but they also reduce the cushioning effect of a slightly under-pressurized tire. Depending on your ride, you may want to fine-tune the balance between cushion and speed.