The Ski Town 4: Hiking through Yankee’s Top 25 Towns for Foliage 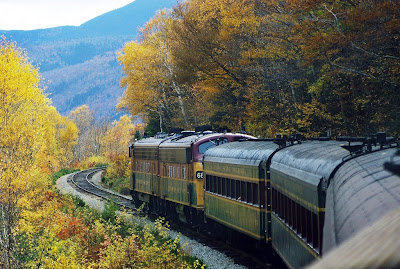 Yankee magazine this month ranked the “Top 25 Towns for Foliage” in New England, based on 14 different measures. I sorted the magazine’s rankings on the Hiking category and created the “Great Kids, Great Outdoors Top 10 Towns for Fall Hikes.”

My previous post covered the Top 3 towns, which were the same in both the Great Kids, Great Outdoors and Yankee lists. With this post, I depart from Yankee’s list, bringing together towns ranked 6, 7, 10, and 13 under another shared category: Waitsfield, VT; N. Conway, NH; Waterville Valley, NH; and Stowe, VT are all well-known ski towns. All make fine fall hiking destinations.

Waitsfield, Vermont. Waitsfield is nestled in a narrow valley between Green Mountain ranges. The Mad River, which gives the valley and the “ski it if you can” resort their names, runs right through the walkable downtown. High on the valley’s western flank, Vermont’s Long Trail has been celebrating its centennial in 2010. Hike north from Appalachian Gap (take Route 17 out of Waitsfield past the turnoff to Mad River Glen, and get on the trail where it crosses the road) and follow the Long Trail 1.3 miles over the east slope of Baby Stark Mt. and the rounded summit of Molly Stark Mt. to Molly Stark’s Balcony. “Here there is a fine view of Camel’s Hump and the intervening peaks,” says the Long Trail guidebook, but the poetry is in the name of the destination.

Conway and North Conway, New Hampshire. North Conway is home to Cranmore Ski Resort and the traditional gateway to the White Mountains’ northern ski areas. In the early days, “ski trains” arrived here carrying hundreds of skiers north out of Boston and southern New England. Trains still run, but they’re now best ridden in the fall. “There may be no better way to see foliage than by train,” write Yankee’s editors. “The Conway Scenic Railroad is just the ticket, wending its way through White Mountain clefts and over trestles lit by the colors of fall.” Yankee also recommends the short hike to Diana’s Baths. But to get a sense of the wide range of outdoor activities available to families in the Conway area, look through AMC’s fall itineraries based out of Pinkham Notch, only a dozen miles north of the crowded shopping strip along North Conway’s Route 16.

Just 10 minutes up the road, the town of Jackson, tied for Yankee’s 12th spot and best known for its cross-country ski trails, offers quieter diversions. Try the one-mile walking tour through town.

Waterville Valley, New Hampshire. Both the town and the ski area of the same name are tucked into a classic U-shaped glacial valley in the south-central part of the White Mountain National Forest. You can see nearby Tripyramid and Osceola peaks from the town square. For a classic fall family hike, turn off Route 49 before you approach the ski area and follow the signs to the Welch-Dickey loop trail. No need to hike over both peaks: Just walking a single mile to the broad overlook below Welch’s summit, for a two-mile roundtrip, will delight even the most reluctant hiker.

Stowe, Vermont. “It’s hardly off the beaten track,” admits Yankee. The town’s white-steepled churches and red barns have long marked Stowe as picturesque, iconic, even quaint New England. The ski area, six miles up the road, maintains its own blend of classic and antique. Beyond that rises Mount Mansfield, Vermont’s tallest, and more Long Trail hikes. A few miles out of the village you can also find mountain bike trails — and hiking — at Trapp Family Lodge, where, in the fall, the hills truly do come alive. 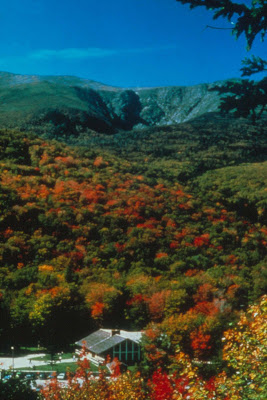 Learn more
– Read “The Top 25 Foliage Towns in New England (and Thus the World!)” in Yankee magazine (September/October 2010); view the list on their website.
– Celebrations of fall over the Columbus Day holiday:
• Mad River Glen is offering single-chair rides on Saturday and Sunday.
• Waterville Valley’s Fall Foliage Festival includes pie-eating contests, magic shows, and the season’s last chance to rent mountain bikes, take them on the Snow’s Mountain chairlift, and ride down.
• In North Conway, Cranmore Ski Resort has carved out a gruesome niche with its “Ghoullog” haunted mountain-top. No age restrictions listed, but clearly not for young souls or the faint of heart. Or visit Story Land.
• In Jackson, Wildcat Ski Area also offers fall foliage gondola rides and a zipline.
• Stowe is hosting an arts festival and a chance to watch candy-makers at work. Gondola rides, a bungee trampoline, and a climbing wall are in operation over the weekend at the ski resort.