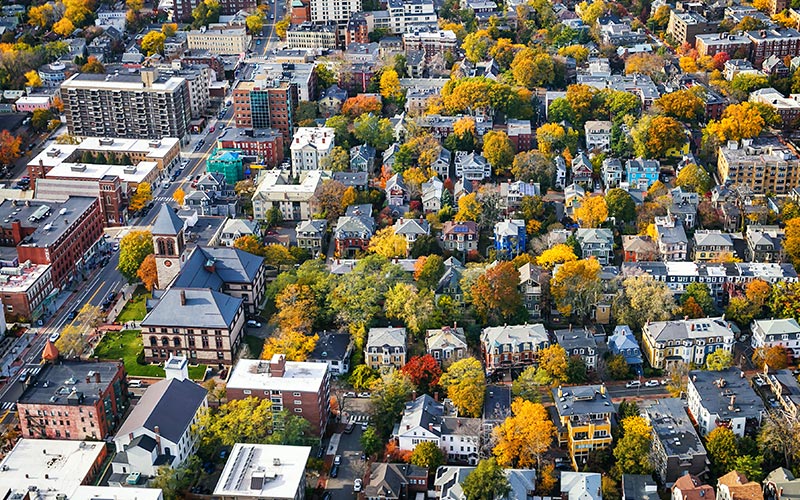 Courtesy of the City of CambridgeCambridge officials are working to rebuild the city’s shrinking urban forest.

Cambridge, Mass., long known as an urban bastion of Ivy League academia, is betting on a new type of greening: harnessing its treetops to fight climate change. Cambridge officials are developing an urban forest master plan to restore and expand the city’s tree canopy after studies found an alarming shrinkage of tree cover.

“We’ve lost 18 percent [of the 2009 coverage] in nine years,” says Steven Nutter, the executive director of the environmental group Green Cambridge. Why? The main culprit, he says, is “how we value trees.”

Working with a landscape architecture firm and a slew of subconsultants, the city launched a task force last June to investigate why the decline is happening and how to encourage regrowth. The task force will publicize its first recommendations in late spring.

Catherine Daly Woodbury, who is managing the project for the city, says Cambridge doesn’t know if it’s losing trees due to disease, age, development, or other causes. Understanding the reasons is key to any reforesting plans, she says. “We’re still trying to understand where the losses are happening and where there’s opportunity to grow future canopy.”

Last year the U.S. Forest Service found that cities nationwide are losing a total of 36 million trees a year, while the square footage of impervious pavement, such as sidewalks and parking lots, increases. But the threat of climate change is pressuring urban areas to regreen. Several American cities have formed urban forest master plans, and last fall 45 cities on six continents, including New York City and Baltimore, launched Cities4Forests, an international World Resources Institute effort to restore urban forests. More than 50 cities are now participating in the program.

Climate change further stresses city trees via drought, pests, and flooding, meaning reforesting is a little like a juggling act. “How do you make all those things work together?” Woodbury asks. “There are myriad reasons why people relate to trees, but how one values that is all trade-offs.”

The task force’s recommendations will focus on best forestry practices, as well as identifying high-priority areas of canopy loss and how to reduce them. Woodbury says she expects the group to bring the master plan to the Cambridge City Council sometime this fall.

With so much expertise available to tap, Cambridge could be a trendsetter, Nutter says. But success will take a sea change in public perceptions. “Too often, [trees are] seen as a feature of the landscape and not as the primary green infrastructure of the city,” he says. “We really need cultural change to happen, and we can only get that through our leadership.”