Thru-Hiking with a 10-Year-Old 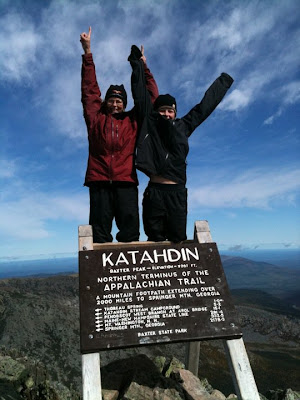 On September 23, 2010, Cheryl Borek stood on the summit of Mt. Katahdin, joining the select society of hikers who complete all 2,170 or so miles of the Appalachian Trail in one hiking season. Two years ago, Cheryl had decided that she wanted to hike the AT before she turned 50. She’d beaten her deadline by two years.

She didn’t stand on the summit alone. She had walked every step of the trail with her 10-year-old son, Owen. During their six months together on the trail, the two had been trail partners as well as mother and son — coping with heat, cold, rain, and minor injuries and also sharing in the friendships and joys of the long journey.

Cheryl first learned about the Appalachian Trail as a teenager in her school’s outing club. She thought then that it would be fun to hike from Georgia to Maine. But after graduating from college, where she played hockey and soccer, and marrying, she spent most of the following two decades focused on her growing family. Seven years ago, when she moved to Durham, N.H., with her husband, a hockey coach, and their four children, the family had never taken an overnight camping trip. Cheryl organized easy day hikes, then one-day climbs of Monadnock and Moosilauke.

Two years ago, Cheryl realized that, between graduations and other family obligations, 2010 was her best shot at hiking the Appalachian Trail. She researched gear and read everything she could find about the trail. The family hiked more often, and camped overnight in the Whites.

As Cheryl began planning seriously for a six-month hike, she was also home-schooling Owen, her youngest child. He told her that he’d like to hike the trail, too. Cheryl talked to Owen about what it meant to hike more than 2,000 miles. “I told him, ‘You won’t see your friends for months. You don’t have to do this.’” But Owen’s interest didn’t flag. Mother and son decided to hike the trail together. Planning now included how they’d incorporate Owen’s schoolwork into the trip. 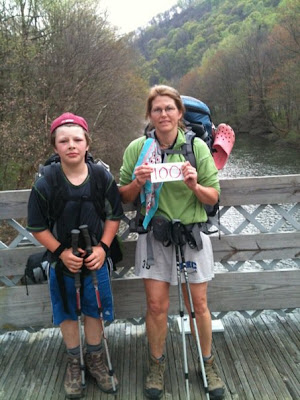 Scheduling the hike around several family events meant that Cheryl didn’t plan their route straight north from Georgia or south from Maine, but as a “flip-flop,” starting in the middle — an approach used by only about 5 percent of thru-hikers. In early April, Cheryl and Owen started in Pennsylvania, hiking north. They were accompanied by Owen’s 14-year-old brother, Charley, who joined the trailside school for a month. At 375 miles, in Kent, Connecticut, the school year was officially over: Cheryl’s husband, Scott, took up home duty for the summer, and Charley left the trail to his mother and brother. Three weeks later, they reached Mt. Moosilauke in plenty of time to celebrate middle son Gordie’s graduation from Cardigan Mountain School.

After the family reunion, Cheryl and Owen returned to their starting point and headed the other direction, to the southern terminus of the Appalachian Trail at Springer Mountain, Georgia. They struggled with the heat, sometimes getting up several hours before dawn to hike during the coolest part of the day. They mailed their down sleeping bags and warm clothes home — only to hit a cold snap the next night and need their sleeping bags sent back to them. Still, they whittled down the weight they carried on their backs until Owen carried only 22 pounds plus water, Cheryl 32 pounds. 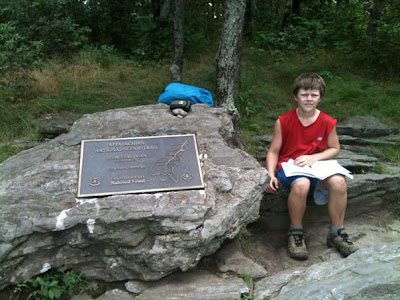 Their mileage picked up, too. In the Shenandoahs, they started “pulling 20s,” hiking 20 and more miles a day. Owen flourished. In the evenings, he often had energy to spare, when Cheryl just wanted to crawl into her sleeping bag with a book. Schoolwork helped pass the time on the trail. Cheryl quizzed Owen on his multiplication tables and state capitals. Every night, he wrote in a journal. He also figured out their daily mileage and tracked their weekly average. “He definitely learned his decimals,” Cheryl says.

It wasn’t only Cheryl and Owen who were learning new lessons. Scott had three teenagers at home during the summer — “the harder job,” according to Cheryl. Bemused mom occasionally took cell phone calls from her 17-year-old daughter, Madeline. “She’d say, ‘Mom! There’s no food in the house.’ I’m standing there on the trail, telling her I was sure she could figure something out.”

Mother and son took another short break after reaching Springer Mountain. In August, they returned again to Moosilauke for the final hike to Katahdin. Months on the trail had formed a strong working partnership between them. “We made decisions together,” Cheryl says. “Owen would say, ‘Let’s do 20 miles today so we can get pizza.’” 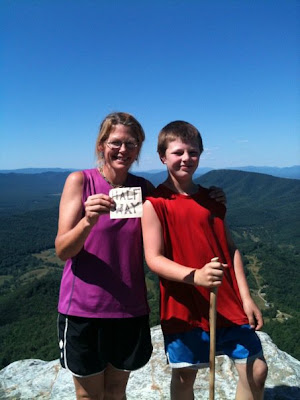 They hit the White Mountains as summer turned to fall. Trails steepened, passed above treeline. “We’d say, ‘This is hard.’” But the investment they’d already made in their goal helped them persevere. On a “gloriously clear” day, mother and son stood on Katahdin’s summit, arms held high over their hands, two wide grins on their faces.

One month after their return, Cheryl says, “It was a wonderful experience for both of us.” Owen’s siblings missed their little brother and show new respect for his achievement. They show new appreciation for their mother, too. When Cheryl looks at Owen now, she sees how much confidence he’s gained.

Cheryl has simple advice for families who think they’d like to hike the trail together: “Don’t be afraid of it. Carve out the time to do it. You won’t regret it.”

Learn more
– Cheryl and Owen Borek read books by Earl Shaffer, the AT’s first thru-hiker, and A Walk in the Woods, Bill Bryson’s hilarious tale of attempting the Appalachian Trail.
– The Appalachian Trail Conservancy is a volunteer organization dedicated to maintaining and preserving the 2,175-mile trail.

All photos courtesy Cheryl Borek: On the summit of Katahdin. The first 100 miles. Signing the summit register at Springer Mt., Georgia. Halfway.