On October 19-20, a half inch of snow fell atop Mount Washington. Vermont’s Killington Ski Resort opened for the season on October 25, the first Eastern ski resort to do so this year. Clearly winter is on its way.

As Marty, the resident cat at the Mount Washington Observatory, can attest, knowing the current conditions is essential for dressing appropriately for the weather. To help you keep track of the arriving season—and its accompanying snow and weather conditions—here’s a quick review of the resources you can follow online. 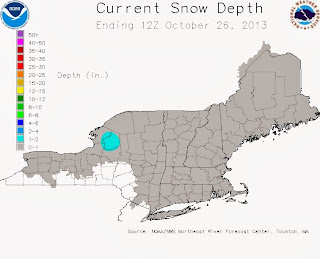 NOAA and the National Weather Service have begun updating the NERFC Snow Depth Map for the season, which provides a daily snapshot of current snow depths across New England and New York. As of October 26, the only snow making it on the map is a light blue 1 to 2 inches in upstate New York.

Current Weather Conditions and Forecasts
According to the nice dashboard display from The Mount Washington Observatory (MWO) that shows current summit conditions, as of 7am on October 26, it was a balmy 20 degrees with 30 mile-per-hour winds. MWO also produces the daily Higher Summits Forecast, which is tailored to exposed above-treeline locations where hikers are exposed to the full brunt of the elements; and the Mount Washington Valley Regional Forecast, which indicates likely conditions at more sheltered, lower elevation locations.

MWO also offers free access to multiple web cams on the summit and at other locations in the nearby mountains. Web cams cover all sides of the Presidential Range, including views from Bretton Woods, Wildcat Mountain, Attitash Ski Area, and Jackson. Summit web cams capture views north, views west, and across the observatory’s observation deck. You can find them all together on the Mount Washington Observatory Webcam Network.

Avalanche ConditionsThe Mount Washington Avalanche Center has not yet begun publishing its daily Avalanche Advisory for Tuckerman and Huntington Ravines, but as the season progresses this is a must-read for backcountry skiers and anybody heading into potential avalanche terrain.