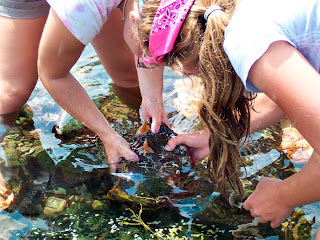 How do you help create the next generation of environmental stewards? It’s a question that Judy Silverberg and others have been trying to answer for several years—a question made both more difficult and more urgent by the knowledge that today’s youth increasingly lack a strong connection to the outdoors.

In 2006, Silverberg, head of wildlife education at New Hampshire Fish and Game, read Last Child in the Woods by Richard Louv. Convinced by Louv’s argument that the nation’s children suffered from “nature-deficit disorder,” the environmental educator helped found the NH Children in Nature Coalition, which became a part of Louv’s national Children and Nature Network. The next year, members of the NH Children in Nature Coalition, including Silverberg, met with Louv to brainstorm how to develop emerging “natural leaders” in the state—teenagers between the ages of 14 and 17 who would help other youth connect with the natural world. In their conversations, the group realized that 12 of the 14 people on the board had attended conservation camp as teenagers—an experience that had been instrumental in guiding them toward environmental careers.

It’s no surprise, then, that the first New Hampshire Natural Leaders program, in 2009, started off with an intensive summer camp. The Natural Leaders program has changed in other ways since that beginning, but the camp experience remains key. For the 2011 program, nine teenagers from around the state converged on Barry Conservation Camp in Berlin in late June for a week of outdoor activities, leadership development, and hands-on exploration of career opportunities in the outdoors.

The weeklong camp included hiking into the Presidential Range and spending the night at AMC’s Lakes of the Clouds Hut. It was the first time that 14-year-old Elena Mednick, from Nelson, and 15-year-old Travis Akerstrom, from Canterbury, had traveled to the White Mountains. The weather didn’t cooperate for a planned summit of Mount Washington, but the group did reach the top of Mount Monroe—Akerstrom’s first 4,000-footer. Even before the week ended, the teen was making plans to return to the Presidentials for another attempt on Mount Washington.

This year’s camp was strongly focused on introducing the young “natural leaders” to career options in the outdoors. The group toured a fish hatchery and participated in an “electro-fishing” exercise with a Fish and Game biologist one day, and learned how to identify trees and determine timber yields from a forester the next day. (Several state agencies, including NH Fish and Game, NH Department of Environmental Services, and UNH Cooperative Extension, joined the Appalachian Mountain Club and other organizations to provide program instruction and support.) Akerstrom, who wants to become a wildlife biologist or conservation officer, especially appreciated the sneak preview of a potential career. “At my school, they don’t teach you that much about the outdoors,” he said. During the camp he also learned about wildlife (“I had no idea there were so many small animals in the woods!”) and the effects of climate change on New Hampshire’s forests. “Did you know that a plasma TV uses almost as much electricity plugged in as it does turned on?” Akerstrom asked, following the camp. “I’m definitely telling my friends about that.”

Three years in, Silverberg and the other program leaders are still trying to determine the best way to develop the next generation of “natural leaders.” The program wants to reach motivated teenagers, inspire and teach them, and give them the tools to go back into their communities and make a difference. Those running the program have discovered that many of the students who are interested in participating are already heavily involved in their communities and schools—and don’t have the time to commit to developing year-long service projects, an initial requirement of the Natural Leaders program. Also, many otherwise interested families weren’t able to afford an initial $1,500 price tag. This year’s formula attempted to address both of these issues.

The current program, at a cost of $575, takes advantage of an affiliation with New Hampshire 4-H Clubs (Camp Barry is a 4-H facility). The scope of the program has similarly scaled back: The teens are given the option to participate in pre-selected service projects in the school year following the camp. The first project, a coastal clean-up day, will be held in September.

At the end of this year’s camp, Mednick considered what she’d learned and what she hopes to accomplish as a New Hampshire Natural Leader. “I want to try to get outside more,” she said. “I know I want to help other people learn more about the environment and global warming,” she added, “but I don’t know exactly how to do that. It seems kind of hard.”

One of the initiatives of the Children and Nature Network is to build a national Natural Leaders Network. The network has organized an annual Natural Leaders Day and created a toolkit to help young people around the country create the next generation of “natural leaders.”