Travels with Charley: Skiing AMC’s Maine huts with a 7-year-old 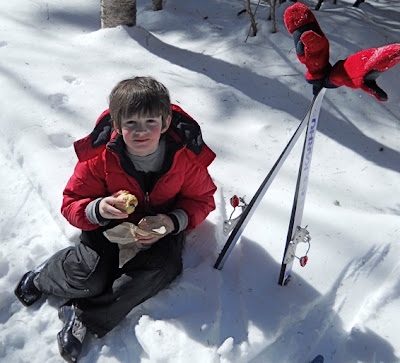 “This was not in the plan.” Those words begin a winter’s tale of parents and children in the outdoors that had me laughing out loud by the end of the first paragraph. Writer and father Nathaniel Reade was trying to get himself and his 7-year-old son, Charley, on skis and out of a parking lot in Greenville, Maine. Except Charley, in Reade’s words, “is having a meltdown the likes of which I haven’t seen since back in pre-school, when he insisted on wearing the same Superman costume for three months.”

We laugh, so I’m told, when we see our own follies dramatized by someone else. That’s certainly the case with Reade’s comedy of errors. And when you’re a parent trying to get your kids to spend time in the outdoors — and like it — even good ideas can spiral off into comedy.

Reade, his wife, and their two sons spent four days on the ski trails that connect AMC’s Maine huts. They liked the idea of being able to ski into Little Lyford’s lodge and cabins without carrying sleeping bags and other heavy gear. Good idea, right? Who wouldn’t want a snowmobile to carry all your stuff in, especially if you’re a family of four? Well, anyone except said family with a sobbing child who is refusing to do even so much as put on his ski boots.

Here’s how Reade gets Charley into his boots:

I ordinarily yell at people who idle their cars (it’s a problem I have), but this meltdown calls for drastic measures: I fire up the engine and crank the heat. Charley stops crying. I feed him chocolate. I manage to get him into his boots, his jacket, his skis. I will later discover that I left the keys in the car and the doors unlocked, but right now my wife and I shoulder our daypacks and off we go, all four of us.

Chocolate plays the same crucial role in this tale as it does in many of my family’s outings. As does a reluctant, sobbing young boy, and parents who try this (flexibility, comforting the sobber) and try that (firmness, yelling at the recalcitrant) to try to make the (insert words of frustration here) trip work. I laughed all the way through. It’s better than crying.

You’ll need to read Reade’s story yourself to see how it ends. I will say this, though: At the end, I wanted to get out on the trails with sobbing children of our own. It’s still winter, after all.